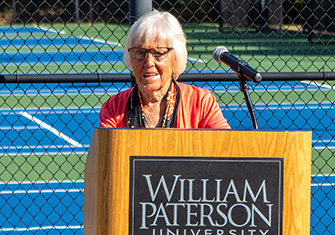 During her 45-year tenure at William Paterson University, Dr. Virginia “Ginny” Overdorf was a dedicated professor of kinesiology, an active researcher in her field, committed to service on campus and to her field, an early and important advocate for Title IX and women’s sports, and the founder and winning coach of the University’s women’s tennis team.

On October 1, members of the William Paterson University community, including many former and current members of the women’s tennis team, gathered to celebrate the dedication of the Dr. Ginny Overdorf Tennis Courts on campus, named in recognition of the Overdorf’s advocacy for women’s sports and her generous donation to the University. Her gift will provide increased support and development opportunities for the tennis program.

“The naming of this court is such a wonderful legacy but the real legacy is the lives we touch and the inspiration we give,” said Overdorf. “I hope I have touched your lives because you have touched mine in so many ways. Thank you for this wonderful honor.”

“Not many people can match the breadth and duration of Ginny’s service to and support for William Paterson. Yet people like her—people who get deeply involved in the life of the institution, start new programs and help grow others; people who stay involved long after they formally retire—are at the heart of every successful higher education institution,” said President Richard Helldobler. “So, Ginny, thank you for this wonderful gift, and thank you for all that you’ve done and continue to do for our students.”

Overdorf was a member of the William Paterson faculty from 1967 until her retirement in 2012. During her tenure, she taught a wide variety of courses and an active researcher; in 1991, she was awarded a grant from Ronald McDonald Children’s Charities to study eating disorders in female athletes. She played an important role in the development of various academic degree programs, and held numerous leadership positions on campus, including chair of her department (1984 to 1996); Faculty Senate vice chair (1997 to 1999) and chair (1999 to 2001); Freshman Seminar coordinator (2002 to 2004), and director, Institute for Creative Aging (2005 to 2007).

In addition, Overdorf coached the field hockey team and in1970 founded the women’s tennis program; during her 17 seasons with the team, her record was 244-82, and she was named NCAA Division III Tennis Coach of the Year in 1984 and inducted into the University’s Athletic Hall of Fame in 1993.

“The dedication of the WP tennis courts in honor of Ginny is well-earned and deserved,” said Marie “Sandy” Strother Ross, MA ’71, who played for Overdorf. “Ginny put tremendous effort forth to develop the team in 1968 and to have young women team members participate in competition and tournaments throughout the country.”

Another former team member, Ann Capobianco ’74, who described Overdorf as “my professor, my coach, my mentor, and part of my family,” said she was “tough but fair…she instilled a work ethic and a desire to win and to be a good human being. This honor is so fitting.”

Also on hand was President Emeritus Arnold Speert to honor his longtime colleague and friend. “Over the years, I have admired those characteristics that prevailed in the early ‘70s: her tenacity, her sensed of fair play, and her dedication to the University. She continued to be guided by those characteristics as she took on numerous roles in service to the institution and to her academic discipline,” he said. “Now, Ginny and the University have come full circle with this gift that demonstrates Ginny’s enduring love for her sport, for William Paterson’s student-athletes, and for this University.” 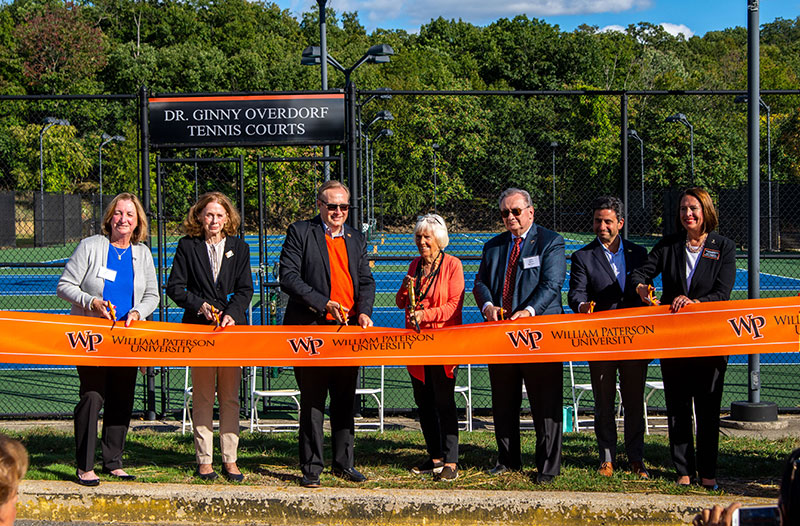