"We just got back from doing the mainstage at Bonnaroo...

I have to say, I've worked with the best crews in the world, all over the world, and Brian and Anthony are by far the best and youngest crew I've ever had the pleasure of working with. Their knowledge, professionalism, and attitude were even noticed by the client.

So kudos to you and your students for raising the bar... From now on, I will only hire your students, period. 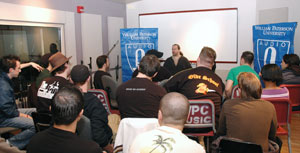 Assistant Engineer: Most recording engineers were previously assistants. The assistant's job is to do everything the engineer doesn't have time to do. This includes: setting up the studio, setting up the console, keeping records of the session, running out for food, sitting in for the engineer when the engineer needs a break and anticipating the session's needs. Assistant engineers have spent considerable time in the studio and has already learned the console and automation, synchronization, microphone usage, etc.

Intern: The intern or production assistant is typically an entry level position in an audio facility. This is a proving ground for the individual who has their goals set on the engineer's seat. During the internship an individual will generally be asked to sweep floors, keep the studios organized, sit at the front desk, deliver or retrieve equipment or food. This is the period during which the intern learns the operation of the facility, gets to know the staff, and shows her/his true desire for excellence, determination and motivation - if you can't complete a simple task, how can you be trusted with paying clients?

Producer: A producer is generally the person who is in charge of the recording session. He/she has been hired to help the artist realize their musical vision and to make the recording commercially viable. Producers generally start out as either recording engineers or as recording artists. In either case, the have developed musical abilities and sensibilities as well as possessing a significant level of understanding of the technology.

Maintenance/technician: The maintenance "tech" is responsible for keeping everything running and performing at a professional level. On one day this individual might be modifying some piece of gear to a particular engineer's needs. Another day might require a series of tape recorder alignments and servicing or making sure all the digital technology within the facility speaks the same language at the same time - not as easy as you might think. Techs generally hale from a desire to tinker with "stuff" and learn by doing or by hanging around with other techs.

Audio Post Engineer: Audio post is typically a process of adding audio elements to either film or video. These elements could be anything from applause and laughter or voice-overs, to creating sounds that have never been heard before such a sound effects. Knowledge of video and synchronization is essential as is the understanding of how audio influences the image. Post engineers tend to work their way up from the tape library as interns to assistants to engineers as they prove themselves an begin to create a client base.

Facilities Manager: Often referred to as the studio manager. This individual is responsible for all the operations within the facility including: hiring/firing, payroll, advertising, client relations, equipment purchase, future development, etc. These folks must possess a considerable knowledge of management and business practices, have developed interpersonal skills, and also have a working knowledge of all the technology in the facility.

Educator: Someone has to teach all these courses in audio and engineering! Hopefully these are people who have been and are active in recording either as a producer or as an engineer. The ability to teach is required and not born into all people. Usually educators are called on to be facility managers, maintenance techs, and motivators as well as recording engineers. For college level teaching, a masters degree has become the minimum requirement. The degree needn't be in audio, however.

New Media Authoring: New media encompasses the world of CD/DVD and web creation. As these technologies have advanced, the need for better quality and more sophisticated audio and sound has arisen. A knowledge of how these technologies operate is required as well as a desire to sit in front of a computer for long hours. Over time, there will probably be a blurred line between new media authoring and audio posting.

Broadcast Engineer: These individuals primarily work in television. They could be running the sound for a golf match or mixing sound for some late night talk show which has a live band. Every TV show needs sound. The people skills are somewhat less demanding than that of the recording engineer in that the broadcast engineer typically doesn't interact directly with the artists/actors. The work tends to be more steady and unionized. Click for more info.

Design Engineer: These are the people who invent and design all the toys and devices that the engineers and musicians use. These days an understanding of digital signal processing is essential though there are companies that design transducers such as mics and speakers. A lot of these folks have degrees in electrical engineering but often this is not enough since this equipment must also sound great. A lot of these designers started out as musicians.

Studio Owner: Studio owners range from people who own such huge multiroom facilities like the Hit Factory or Avatar to the dude down the street who just bought 24 tracks of MDM, a mixer, and a few microphones. You have to start out with some money, some knowledge, and some people who trust you with their recording project. More than a few studios began with a musician trying to finance their own recordings by selling studio time to outside clients. Before you get your parents to re-mortage the house, make sure you know what your doing!

ADR/Foley Engineer: A vast majority of sounds in film (and video) are created after the film has been shot and edited. Automatic dialog replacement or ADR, is the process of recording the actor re-speaking her/his lines as they watch the edited movie. Foley artists are the people who slam car doors, walk on different surfaces with a variety of footwear, and make all sorts of appropriate sounds in time with the action of the film. There are engineers who's job it is to record all of these sounds an then place them into proper sync with the action.