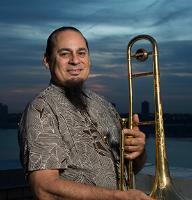 One of the finest jazz trombonists alive today, Steve Turre has consistently won Readers’ and Critics’ polls in JazzTimes, Downbeat, and Jazziz for Best Trombone and Best Miscellaneous Instrumentalist (shells). He has played with Ray Charles, Art Blakey and the Jazz Messengers, Dizzy Gillespie, McCoy Tyner, J.J. Johnson, Herbie Hancock, Lester Bowie, Tito Puente, Mongo Santamaria, Van Morrison, Pharoah Sanders, Horace Silver, Max Roach, and Rahsaan Roland Kirk. Steve has been a member of the Saturday Night Live Band since 1984. Has led numerous ensembles, including his Sanctified Shells choir, and has many albums as a leader, including a 1999 release, Lotus Flower, which showcases his sextet with strings. In 2000, released In The Spur of the Moment, with master pianists Ray Charles, Chucho Valdes, and Stephen Scott. Steve’s latest release is called Spiritman, released on Smoke Sessions Records.

Sittin' In  Meet-the-Artist sessions will be prerecorded on July 20 and 21. Audience members can submit questions in advance to newmant@wpunj.edu.

This Virtual Concert is FREE, but we ask that you register, using the button below, to receive the URL link when the concert goes live.