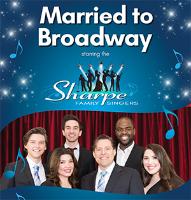 The Sharpe Family Singers, the global TikTok internet-sensation, is bringing the “family” back to “family entertainment!” Led by leading Broadway-star parents, Ron & Barbra Sharpe, who first met onstage in the original Broadway production of Les Miserables playing the romantic lead roles of Marius and Cosette. After being married onstage over 1,000 times, they decided to do it for real! Their show also features their two adult-children, Samantha & Logan Sharpe, their fan-favorite adorable twin-boys, Connor & Aidan Sharpe, and three “adopted” family members (a boyfriend, a best friend, and a lovable uncle). Their repertoire includes songs from blockbuster movies like The Greatest Showman, the Disney songbook, a wide variety of Top 40/Contemporary Pop Hits, and new hit Broadway shows like Hamilton and Dear Evan Hansen as well as classic show tunes from Les Miz, Phantom, Evita, Guys and Dolls, West Side Story and more.

The Family has emerged as one of the hottest new content-creators, and influencers, on the scene with over 600 million worldwide viewers and 4.3 million followers on TikTok!  With a recent appearance on ABC’s Disney Family Singalong, and YouTube beating down their door to become the next biggest stars, this incredibly talented family is fast-becoming one of the world’s most recognized singing groups. If you are looking for a fresh new take on Broadway revues, this is the show for you and your family!

Admission:  Pay What You Choose (Starting at $5.00)
All tickets must be purchased in advance via the internet ticketing systems for this performance.