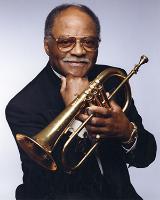 Clark Terry would have turned 100 years old in December.  In honor of that milestone, The Jazz Room pays tribute to the iconic trumpeter and educator who chose William Paterson as the site of The Clark Terry Archive.  Terry is not only one of the most iconic trumpeters in jazz who influenced his former student Miles Davis and countless others – he is also an American icon, as the first African American on nightly network TV as featured member of the NBC Tonight Show Band from 1960-70.  He is considered to be one of the true founders of jazz education.  An all-star gathering of musicians from Clark Terry’s bands and the WP faculty will perform some of Terry’s original compositions, music from his quintet with Bob Brookmeyer, and jazz and popular standards loved by Terry, including Thelonious Monk and Duke Ellington.  Photo images, music manuscripts and other materials from the WP Clark Terry Archive will be showcased in the lobby and in an onstage slideshow on the day of the performance.

Sittin’ In, the series of concert previews, presents featured interviews with jazz artists and guest speakers.
This informal discussion is free to the public.
Sittin' In Meet–the–Artist sessions are one hour prior to each concert (3:00 p.m.) and broadcast on the WP Presents! You Tube channel. Subscribe to the channel here.
Submit questions in advance to: jazzroom@wpunj.edu