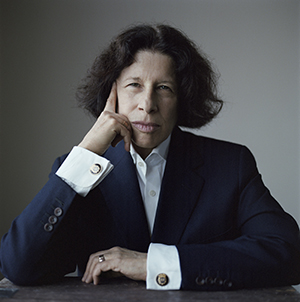 In a cultural landscape filled with endless pundits and talking heads, Fran Lebowitz stands out as one of our most insightful social commentators. Her essays and interviews offer her acerbic views on current events and the media – as well as pet peeves including tourists, baggage-claim areas, after-shave lotion, adults who roller skate, children who speak French, or anyone who is unduly tan. The New York Times Book Review calls Lebowitz an "important humorist in the classic tradition." Purveyor of urban cool, Lebowitz is a cultural satirist whom many call the heir to Dorothy Parker. The off-the-cuff writer’s thoughts are pointed, taut and economical, yet equally forthright, irascible, and unapologetically opinionated.

Lebowitz’s big break came when she was hired by Andy Warhol as a columnist for Interview. That was followed by a stint at Mademoiselle. Her first book, a collection of essays titled Metropolitan Life, was a bestseller, as was a second collection, Social Studies. By turns ironic, facetious, deadpan, sarcastic, wry, wisecracking, and waggish, Lebowitz’s prose is wickedly entertaining. Lebowitz is also the author of the children’s book, Mr. Chas and Lisa Sue Meet the Pandas.

Between 2001 to 2007, Lebowitz had a recurring role as Judge Janice Goldberg on the television drama Law & Order. She also had a part in the Martin Scorsese-directed film, The Wolf of Wall Street (2013). A raconteur if ever there was one, Lebowitz has long been a regular on various talk shows including those hosted by Jimmy Fallon, Conan O'Brien, and Bill Maher.

In 2010 Martin Scorsese directed a documentary about Lebowitz for HBO titled Public Speaking. A limited documentary series, Pretend It's a City, also directed by Martin Scorsese, premiered on Netflix in 2021, and was nominated for the 2021 Emmys in the Outstanding Documentary Or Nonfiction Series category. In 2021 she was given the Forte dei Marmi Festival della Satira Lifetime Achievement Award and was a 2021 Foreign Press Honorary Awardee – an award given by the Foreign Press Correspondents Association & Club USA.

Lebowitz was named to Vanity Fair’s International Best Dressed List Hall of Fame in 2008. She remains a style icon. Lebowitz lives in New York City, as she does not believe that she would be allowed to live anywhere else.

Reserved Seating: Gold Circle $50 • Orchestra and Front Loge $40 • Rear Loge $25
WP students admitted free with ID on day of event (1 ticket per student).
WP employees and alumni can receive a 20% discount on all seats if tickets are purchased after December 15.
10% off all seats for senior citizens. Discounts cannot be doubled.

For audiences eager to hear illuminating discussions by today’s most in-demand speakers, William Paterson University offers the Distinguished Lecturer Series (DLS)—an event that began in 1980 and brings illustrious personalities from the worlds of politics, government, the arts, literature, sports, science, and business, along with original programs—to Wayne, New Jersey.