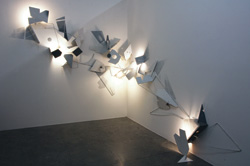 "Galactic Band," a mixed media sculpture from the Lightscape Series by Gianluca Bianchino

Three New Jersey artists respond to the unique architecture of the Court Gallery of the University Galleries at William Paterson University in Wayne through site-specific installations in Close Encounters: Milcah Bassel, Gianluca Bianchino, and Joseph Gerard Sabatino, on view from January 20 through March 27, 2015. Gallery hours are Monday through Friday from 10 a.m. to 5 p.m. and on the following Sundays: February 1, February 8, February 22, March 1, March 8, and March 15 from noon to 4 p.m. Admission is free. An opening reception for the exhibition will be held on Sunday, January 25 from 2 to 4 p.m.

The artists create physical and visual experiences that are both tactile and illusive in nature in response to the two-story Court Gallery space, an enclosed courtyard featuring glass walls and a domed glass ceiling. Appealing to our various senses, the works manipulate one’s desire to view, touch, or taste the objects before them. Milcah Bassel’s interactive installation connects the viewer’s body to the surrounding space, yet also limits the extent of their movements. Gianluca Bianchino’s mixed media sculptures create an ever-changing display of light and shadows on the gallery walls. Joseph Gerard Sabatino presents a seeming assortment of sweets glazed in what would be toxic materials. Together the artists lead us to question our instinctive responses to the stimuli.

Bassel suspends numerous elongated fabric forms from the gallery’s ceiling support structure. Visitors are invited to wear the blue or pink fabric pieces that fit like a hat. Resembling a pilot’s cap, the hats reference aviation and flight as well as drawing inspiration from head coverings depicted by Piero della Francesca and other Renaissance painters. With her interactive sculptures, Bassel draws the viewer’s attention to the vast open space above while also grounding them in the architectural space.

Bianchino presents an experimental installation comprised of paper, wood, plexiglass, metal rods, acrylic paint and solar-powered LED lights that interact with the sunlight streaming through the skylight ceiling. From the sun’s path, viewers experience the movement of shifting shadows and forms on the gallery walls. The sunlight also powers small colored lights that further transform the installation at night.

Sabatino activates the perimeter of the gallery with sculptures and a site-specific installation that toy with our expectations and desires. Approximately 100 luscious lollipops hang from the ceiling but close examination reveals they are inedible and coated with tar. Also scattered throughout the space, Sabatino displays meticulously decorated cupcakes and desserts that are made of industrial and even poisonous materials. One corner of the gallery is filled with stacks of bakery boxes tied with red twine. While their outward appearance is familiar and evokes comfort food, visitors cannot satisfy their desires to open them and consume their contents. About the artists:

Bassel was born in Boston and raised in Israel. She currently lives and works in Jersey City, N.J. and Tel Aviv, Israel. She holds an M.F.A. in visual art from Mason Gross School of the Arts, Rutgers University (2013), and a post-baccalaureate in studio art from Brandeis University (2011). She has shown her work at the Newark Museum 2014 Arts Annual; Soho20 Chelsea Gallery, New York; Whitebox, New York; the Kniznick Gallery at the Women’s Studies Research Center at Brandeis University, among others. Residencies include ACRE in Steuben, Wis., and an NEA-funded residency at The Brodsky Center at Rutgers University.

Bianchino was born in Avellino, Italy. He currently lives and works in Jersey City. He received a B.F.A. from New Jersey City University (2002), and an M.F.A. from Montclair State University (2011). His work has been shown at Chashama, New York; The Painting Center, New York; City Without Walls, Newark; Gallery Aferro, Newark; Exit Art, New York; and the Puffin Cultural Center, Teaneck, among others. Residencies include the Immigrant Artist Mentorship Program in New York, the Eileen S. Kaminsky Family Foundation Residency at Mana Contemporary in Jersey City, and the Aferro Studio Residency in Newark.

The exhibition is one of three on view concurrently in the University Galleries. The East Gallery features Float: New Work by Maria Lux, the fall 2014 William Paterson University Artist-in-Residence. On view in the South Gallery is Zhiping Lu: Aesthetics of Printmaking. Organized by the William Paterson Center for Chinese Art in collaboration with the Liu Haisu Museum in China, this exhibition showcases silkscreen prints by master printer Zhiping Lu.

This exhibition is made possible in part by funds from the New Jersey State Council on the Arts/Department of State, a partner agency of the National Endowment for the Arts. The William Paterson University Galleries are wheelchair-accessible.  Large-print handouts are available. For additional information, please call the Galleries at William Paterson University at 973-720-2654.