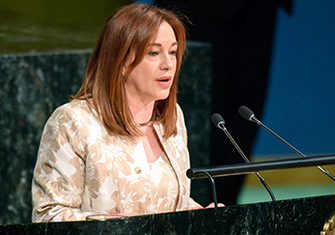 Her Excellency María Fernanda Espinosa Garcés, president of the General Assembly of the United Nations, will deliver the Spring 2019 Tinker Lecture at William Paterson University in Wayne on Tuesday, April 16, 2019. Her lecture, “The United Nations: Multilateralism, Democracy, Immigrant Rights and Gender Equity,” will be held from 11 a.m. to noon in the University Commons Ballrooms on campus. The event is free and open to the public.

“International institutions such as the United Nations are critical in increasing cooperation, and decreasing conflict among nation-states,” says Richard Huizar, assistant professor of political science and director of the University’s Latin American and Latino Studies Program. “This lecture is of particular importance for those interested in learning more about the current political and economic crisis in Venezuela, U.S.-Mexico relations, and other issues of global importance such as Brexit.”

A native of Ecuador, Garcés is only the fourth woman to serve as president of the United Nations. She has more than 20 years of multilateral experience in international negotiations, peace, security, defense, disarmament, human rights, indigenous peoples, gender equality, sustainable development, environment, biodiversity, climate change and multilateral cooperation. She has served Ecuador as Minister of Foreign Affairs, Minister of National Defence, and Coordinating Minister of Natural and Cultural Heritage. Gracés holds a master’s degree in social studies and Amazonian studies from the Facultad Latinoamericana de Ciencias Sociales Sede Ecuador, as well as a bachelor’s degree in applied linguistics from the Pontificia Universidad Católica del Ecuador.

The lecture is sponsored by the Latin American and Latino Studies Program, the Political Science Department, the M.A. Program in Public Policy, the Office of the President, the College of Humanities and Social Sciences, and a grant from the Tinker Foundation. The Tinker Foundation promotes the development of an equitable, sustainable and productive society in Latin America and seeks to enhance understanding in the U.S. of Latin America and how U.S. policies may impact the region.

For additional information, contact Richard Huizar at William Paterson University at 973.720.3423 or huizarr@wpunj.edu.