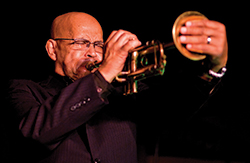 Trumpeter Eddie Henderson will perform on Sunday, December 8 at William Paterson University in Wayne. The concert will be held at 4 p.m. in the University’s Shea Center for Performing Arts as part of this season’s Jazz Room series.

Prior to the concert, Henderson will be the guest for “Sittin’ In,” an informal discussion about jazz at 7 p.m. Admission is free to all Jazz Room ticketholders.

Henderson studied trumpet at the San Francisco Converservatory of Music after being influenced by Miles Davis at an early age. He then studied medicine and became a medical doctor in 1968. After practicing general medicine for some time, he chose to follow his dreams of becoming a musician. Henderson was a member of Herbie Hancock’s lengendary Mwandishi band in the early 1970s. He went on to play with a number of jazz legends and recorded various group and solo albums.  Henderson led a rock-oriented group but returned to playing acoustic hard bop in the 1990s. In recent years, he has gained recognition for playing at international venues, including festivals in France and Austria. Henderson’s first Jazz Room appearance promises a wide arrangement of song variations and fascinating tunes.

Launched in 1978, the Jazz Room is one of the largest and most prestigious college-sponsored jazz events in the country. Performers include renowned professionals who encompass the complete spectrum of jazz, as well as William Paterson’s own student ensembles. The series has won numerous grants from the New Jersey State Council on the Arts for its innovative programming.