Emil Salvini '71 Shares Hope and Memories of the Jersey Shore 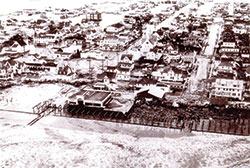 Long before Hurricane Sandy hit New Jersey in late October 2012, author and historian Emil Salvini ’71 had been documenting surprising historical facts about the Jersey Shore on his PBS-NJTV television series Tales of the Jersey Shore.

As host and creator of the TV series, Salvini explores the many curiosities, history, and anecdotes of the Jersey shore. From the tragic destruction of the SS Morro Castle to the controversial Sunday driving ban in Ocean Grove that lasted nearly a century, each episode uncovers a fascinating topic.

When superstorm Sandy wreaked its havoc along the shoreline, Salvini immediately went to work to produce the TV episode “Storm Clouds —Historic Storms of the Jersey Shore” (which can be viewed at www.njtvonline. org). In the episode, Salvini compares Sandy with two other major storms, the Great Atlantic Hurricane of 1944 and the Ash Wednesday Nor’easter of 1962. The latter lasted three days and, unlike Sandy, affected every resort on the Jersey coastline

His goal was not merely to show the devastation—as many shows have done —but to put the emphasis on messages of hope and rebuilding. Still, it is an emotional episode. “We had some highly emotionally charged interviews that touched me,” says Salvini. “Big burly guys, first responders, who break down crying in the middle of the interviews because of what they saw.” After showing it to a friend, Salvini decided to leave in the footage. He felt that the world needed to know what the people of New Jersey went through.

Salvini doesn’t think his television series would have been possible without his popular Tales of the New Jersey Shore Facebook page. Launched in 2009, it has more than 33,000 followers as of this writing. Salvini says the two entities feed off of each other; he uses Facebook to give updates on the filming or help him find people willing to be interviewed on camera.

His Facebook followers include New Jerseyans as well as displaced fans from all over the United States and the world. They share a couple things in common, he says: they are proud of New Jersey and, whether they live in Singapore or Hawaii, they have great memories of the Jersey shore.

Scores of people comment on his every post, whether it’s a photo of one of the bygone Asbury Park carousels or a 1953 vintage postcard of the Point Pleasant Boardwalk. “My parents married in August 1953 and honeymooned in Point Pleasant…they might be in this picture!” writes a fan. At one point Salvini surveyed his Facebook fans on whether you call it a “Taylor ham” or “pork roll” sandwich, and it led to a firestorm of responses and a heated debate. “I had to calm people down,” he laughs.

“Every minute, every couple of hours, more people are signing up and I think that’s driven by Sandy. It’s sad but that’s what’s happening,” Salvini adds. “People want to know what’s going on. And people are sharing and saying, ‘Go to this site.’”

Salvini graduated from William Paterson in 1971 and earned his graduate degree at Harvard. He began writing historical books as a sideline hobby while serving as president and CEO of Wheal-Grace printing company. In 2013, he sold ownership to his wife Nancy Salvini ‘72 and his daughters Beth Salvini and Amy Salvini-Swanson.

A Wayne resident, Salvini also owns a century-old home in Cape May, which first inspired him to write a history of the town. His books include Boardwalk Memories: Tales of the Jersey Shore; Jersey Shore: Vintage Images of Bygone Days; and The Summer City by the Sea: Cape May, New Jersey—An Illustrated History.

For Salvini, it’s all a labor of love. “I was an art major at William Paterson and a K-12 education minor, although I never taught. But I get a good feeling when I receive private messages on the Facebook site from teachers who tell me that they use the television show for education purposes and teaching,” he says. Salvini is already thinking about doing another television episode about Hurricane Sandy that focuses on post-Sandy restoration. WP