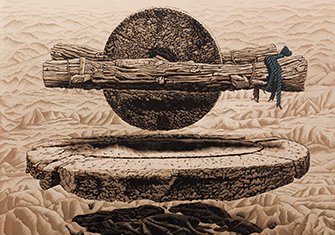 William Paterson University’s Center for Chinese Art, the first nonprofit center for Chinese art in the United States that aims to academically promote cultural and artistic exchanges between the two countries, will celebrate its 10th anniversary with the exhibition Lines Crossing: Contemporary Chinese Printmaking, on view in the University Galleries in the Ben Shahn Center for the Visual Arts on campus from September 9 to through October 18, 2019. Gallery hours are Monday through Friday from 10 a.m. to 5 p.m., and on select Saturdays (September 28 and October 12) and Sundays (October 20) from 10 a.m. to 1 p.m.

A special reception celebrating the 10th anniversary will be held on Monday, September 9 from 4 to 6:00 p.m. in the University Galleries. Admission is free and open to the public.

Lines Crossing: Contemporary Chinese Printmaking features artworks created by 20 Chinese printmakers and masters, who have won national and regional printmaking exhibition awards in China. Ranging from wood engravings to lithographs and intaglios, these artworks were created by a new generation of printmakers who are exploring innovative directions in a medium with an age-old legacy in China.

The beginning of China's contemporary printmaking movement can be traced back to woodcuts introduced by Lu Xun in the 1930s, which sought subjective expression by subverting objective reproduction, says Zhiyuan Cong, William Paterson University professor of art and director of the Center for Chinese Art, who organized the exhibition in collaboration with Kristen Evangelista, director of the University Galleries.

Chinese printmaking has evolved over several generations, Cong explains. “These artists are not restricted by the means of expression, but focus on the aesthetic tastes; they are not limited by the established types of prints, but seek to put more emphasis on personal expression,” he says. “Their works set the path for, and lead the direction of, the continuing development of Chinese contemporary prints.”

The history of printmaking is also interconnected with the development of art, science, and technology, Cong adds. “From the Chinese invention of papermaking in the Eastern Han Dynasty (AD 25-220), to the development of movable type printing in the Northern Song Dynasty (AD 960-1127), engraving and color printing in the Ming Dynasty (AD 1368-1644), and the invention and development of European intaglio (15th century) and lithography (18th century), all these innovations demonstrate the influence and imprint of each era and impact of scientific development on the art of printmaking,” he says. “The United States succeeded in becoming the world center of printmaking after the industrial revolution of the late 19th century, and later developments such as the photographic revolution in the 1930s, and now the rise of digital technology have had a significant impact on this art form. This exhibition explores the current status of printmaking in China, its birthplace.”

William Paterson University’s Center for Chinese Art was established on September 9, 2009. Over the past decade, the center has offered courses, symposiums and exhibitions of Chinese art, presented numerous demonstrations and talks by renowned Chinese artists, and provided study abroad programs in China focused on Chinese art and culture, and has gained international recognition in art circles in both the United States and China.

The exhibition is one of three on view concurrently in the University Galleries. In the South Gallery, The World Through My Eyes: Celebrating the Legacy of Ben Shahn, a selection of works on paper by the social-realist artist Ben Shahn, commemorates the 50th anniversary of Ben Shahn's passing and also the 40th anniversary of the University Galleries. In the East Gallery, Visiones Latinx: Selections from the Permanent Collection, showcases works on paper and artists’ books by artists of Argentinian, Brazilian, Chilean, Cuban, and Mexican heritage.