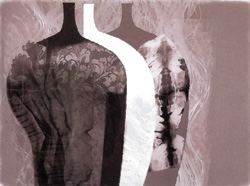 Master printmaker Zhiping Lu brings a fresh perspective on ancient forms with his innovative silkscreen prints in Zhiping Lu: Aesthetics of Printmaking, on view in the University Galleries in the Ben Shahn Center for the Visual Arts at William Paterson University in Wayne from January 20 through March 27, 2015. Gallery hours are Monday through Friday from 10 a.m. to 5 p.m. and on the following Sundays: February 1, February 8, February 22, March 1, March 8, and March 15 from noon to 4 p.m. Admission is free. An opening reception for the exhibition will be held on Tuesday, January 20 from 12:30 to 2 p.m.

Zhiping Lu is an outspoken advocate for a renewed investigation of printmaking. More than ten years ago, he collaborated with colleagues to launch a print workshop in Shanghai and train students in this lesser-known art form. Although the origins of printmaking can be traced to as early as 165 A.D., the genre has become more prominent in the past 100 years. Western techniques such as etching were introduced in the 18th century and lithography was practiced by the early 20th century. From the 1930s until 1978, artists utilized woodblock prints to depict peasants and workers in response to the Cultural Revolution. By the 1980s, artists embraced silkscreen printmaking and explored aesthetic concerns. Similarly, Zhiping Lu blends abstraction and representation in the silkscreen prints currently on display.

This exhibition marks the University Galleries’ fourth collaboration with the Center for Chinese Art. Through open dialogue and collaboration, the Center for Chinese Art and the University Galleries have co-presented several exhibitions including: Ink Rhythm from River and Sea: Inheritance and Innovation, Chinese Drawings from the Collection of the Central Academy of Fine Arts, and Play Ink - Ink Play: Chinese Opera Painting.

These exhibitions draw upon the Center for Chinese Art’s close connections with significant universities, museums, and cultural institutions including the Beijing Central Academy of Fine Arts, the Nantong Institute of Calligraphy and Chinese Painting, and the Shanghai Liu Haisu Museum. Through these partnerships and exchanges, William Paterson University provides audiences with an introduction to China’s rich and varied artistic traditions through the eyes of contemporary artists.

The exhibition is one of three on view concurrently in the University Galleries. The Court Gallery features Close Encounters: Milcah Bassel, Gianluca Bianchino, and Joseph Gerard Sabatino, a group exhibition by three New Jersey artists who respond to the unique architecture of the exhibition space. On view in the East Gallery is Float: New Work by Maria Lux, the fall 2014 William Paterson University Artist-in-Residence.