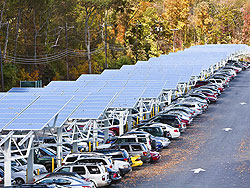 William Paterson University’s solar panel facility ranks among the top ten largest installations at higher education institutions in the United States, according to a new report released by the Association for Sustainability in Higher Education (AASHE).

William Paterson has made a strong commitment to energy conservation. One year ago, in October 2010, the University dedicated what was then the largest solar energy facility on any university campus in the U.S.

“We are pleased to play a leadership role in the growing trend of institutions pursuing solar energy,” says Steve Bolyai, vice president for administration and finance. “Our project is estimated to save an estimated $4.3 million in energy costs over the next 15 years, while also reducing our carbon footprint.”

The installation will be capable of supplying 3.5 megawatts of clean, low-cost energy. The first 3-megawatt phase has been completed; a second 500-kilowatt phase is scheduled to go online within the next few months.

Elevated solar arrays are located in five parking lots on campus. Solar panels are located on the Power Art Center, the upper roof of the Recreation Center, Speert Hall, and the University Commons Ballroom.

In the second phase of the project, solar panels will be installed on the roofs of the Valley Road building, Hobart Hall, and Science Hall East and West.

William Paterson University is one of the nine state colleges and universities in New Jersey. It offers more than 250 undergraduate and graduate degree programs through five colleges: Arts and Communication, Cotsakos College of Business, Education, Humanities and Social Sciences, and Science and Health. Located on 370 hilltop acres in Wayne, the University enrolls more than 11,300 students and provides housing for nearly 2,600 students.