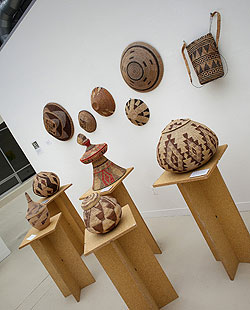 A selection of African art and artifacts, including masks, symbols of leadership, ancestor sculpture and guardian figures, household items, and objects used for personal adornment will continue to be on view in the Ben Shahn Galleries at William Paterson University in Wayne from January 30 through March 4, 2011. Gallery hours are Monday through Friday, 10 a.m. to 5 p.m. Admission is free. A reception will be held in Sunday, January 30, from 3 to 5 p.m. in the galleries.

The exhibit is being held in conjunction with the University’s second annual Cross-Cultural Arts Festival. This year’s festival, Africa and the African Diaspora, to be held from March 22 to April 8, showcases the impact and influence of African culture on the visual arts, theater, film and music.

The Court Gallery exhibit, titled “Objects of Power,” is a partial selection from the nearly 700 objects donated to the University by Joan and Gordon Tobias, private collectors who frequently traveled to Africa and collected the pieces over a 30-year period.

The objects featured in the exhibit include ritual objects used in initiation rites and passages, courtship and marriage ceremonies, spirit and ancestor worship, and seasonal and harvest festivals. “The visual arts and artifacts of Africa are wide-ranging and touch every aspect of daily life,” says Nancy Einreinhofer, director of the Ben Shahn Galleries. “These objects are closely tied to traditional African religious beliefs and the ceremonies that are integral to African tribal communities.”

Among the items on display is a carved wood antelope headdress from the Bamana people of Mali. The headdress is strapped to the head and used in harvest ceremonies. The carved animals are a composite of different species of antelope, whose grace and strength is thought to embody the idea qualities of champion farmers. The headdress is worn with a full body fiber costume representing water.

Also on view is a seated ancestral statue from the Dogon people of Mali. Usually commissioned by the family, such as statue is created by the sculptor to evoke a dead ancestor or an ethereal spirit and is always grave and serene.

Symbols of leadership, such as a carved stool from the Senufo people of Guinea, are also on display. Carved stools such as this distinguished the chief’s throne from other seats. With a curved backrest and applied metal as decoration, this stool would have been held in high esteem.

Household and personal items are also on view, including a fly whisk from the Kikuyu people of Kenya. Made of wildebeest hair, wood, wire and string, the object is used to brush away flies, but is also a symbol of importance for officials and chieftains.

A Zulu nyoga, or beaded wedding veil, from the Ndebele people of South Africa, is a clan treasure handed down from one generation to another. The veil, which symbolizes fertility and is part of the bridal costume, hangs from the shoulders at the back and trails on the ground. Other personal adornments include Zulu necklaces featuring featuring cylinder pendants that are covered with unique beaded designs, and a beaded apron wown on important ceremonial occasions by a married woman.

The Joan and Gordon Tobias Collection of African and Oceanic Art was given to the University in 1998. Research and documentation of the art and artifacts has resulted in exhibits of selections from both the African and Oceanic collections. This exhibit, organized by Nancy Einreinhofer and Linda Pugliese, further expands the educational materials associated with the collection.

The exhibit is one of three shows on view concurrently in the Ben Shahn Galleries. In the South Gallery is “American Impressions,” an annual juried exhibit of works by printmakers from the across the United States. On view in the East Gallery is “Elusive Borders,” a series of prints by Eileen Foti, the 2009 “American Impressions” Fellow, selected by Willie Cole.

This exhibit is made possible in part by funds from the New Jersey State Council on the Arts/Department of State, a partner agency of the National Endowment for the Arts.