One of the world’s premiere jazz pianists, Charlap is known for his interpretations of American popular songs 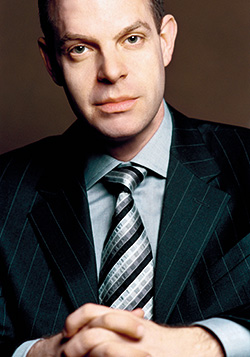 Bill Charlap, the internationally acclaimed jazz pianist, has been appointed director of the Jazz Studies Program at William Paterson University in Wayne, N.J. The program, founded in 1973, is one of the longest-running and most respected jazz programs in the country.

Charlap, who will join the University faculty on September 1, becomes the fifth world-renowned musician to lead the program. Founded in 1973, the program has been directed by legendary trumpeter and composer/arranger Thad Jones, renowned bassist Rufus Reid, and internationally acclaimed pianist James Williams. Most recently, the program was directed by preeminent pianist Mulgrew Miller, who died in May 2013.

Considered one of the world’s premiere jazz pianists, Charlap has performed with many leading artists, ranging from Phil Woods and Tony Bennett to Gerry Mulligan and Wynton Marsalis. He is known for his interpretations of American popular songs and has recorded albums featuring the music of Hoagy Carmichael, Leonard Bernstein and George Gershwin.

In 1997, Charlap formed the Bill Charlap Trio with bassist Peter Washington and drummer Kenny Washington, which is now recognized as one of the leading groups in jazz. He has received two Grammy Award nominations: for Somewhere: The Songs of Leonard Bernstein and The Bill Charlap Trio: Live at the Village Vanguard. A Blue Note Records recording artist from 2000 to 2010, Charlap was pianist and musical director for The Blue Note 7, an all-star jazz septet celebrating the legacy of Blue Note Records on its 70th anniversary. The septet performed a 50-city tour and released the CD, Mosaic: A Celebration of Blue Note Records. Charlap, who now records for Impulse!, also serves as the artistic director of New York City’s Jazz in July Festival at the 92nd Street Y and has produced several concerts for Jazz at Lincoln Center.

“I am honored to join the distinguished faculty of William Paterson University as director of jazz studies,” says Charlap. “The Jazz Program at William Paterson is recognized throughout the world as one of the finest learning institutions for the evolving professional musician, and I look forward to continuing and expanding on this illustrious legacy. It is my goal to guide the students towards developing a complete command of their instruments and the tools of improvisation, a comprehensive understanding of the music's history, and ultimately to help them on the road to achieving their own personal vision.”

At William Paterson, Charlap will direct six of the program’s 24 small jazz groups on a weekly basis.  He will host the program’s dialogue days that feature peer and faculty critiques of student performances, and he will regularly participate in numerous other activities and concerts.

“Bill Charlap is the product of a successful musical family with a rich history in popular music, in both performance and composition,” says Daryl Moore, dean of the College of the Arts and Communication.  “His parents set the stage, providing the foundation for his ascension in piano performance, which began before the age of five, and has propelled him to his current status as a leader in the vanguard of America’s true art form—jazz. We are so fortunate to have landed this passionate and talented musician and teacher as the director of our prolific Jazz Studies Program.”

“We are all tremendously excited to have Bill Charlap joining us as the new director of jazz studies,” says David Demsey, professor of music and coordinator of the Jazz Studies Program.  “The public already knows him as a true jazz piano giant.  But, he is also an equally inspiring and caring teacher, and he is one of the great interpreters and authorities on the Great American Songbook.  It's as if we are getting a major jazz historian and analyst on our faculty, as well as one of the world's great pianists.”

The William Paterson University Jazz Studies Program is unique among higher education programs. Among the most respected programs in the country, it is one of the few with an emphasis on small-group playing, improvisation and a genuine commitment to the jazz tradition.  It is also one of the five oldest jazz studies degree programs in the U.S., having celebrated its 40th anniversary in 2013.   Jazz majors come to William Paterson from all parts of the United States and all corners of the world to study with its artist/faculty of world-class New York–area jazz professionals. Students currently hail from 23 states and eight foreign countries and include a number of Fulbright Scholars.

The University is also home to the Living Jazz Archives, which includes the Clark Terry Archive, featuring manuscripts, recordings and memorabilia from one of the century's great trumpeters and one of the founding fathers of jazz education; the Thad Jones Archive, a collection of original scores and parts composed or arranged for the Thad Jones-Mel Lewis Jazz Orchestra, now the Vanguard Jazz Orchestra; the James Williams Archive, which includes compositions, arrangements and nearly 300 rehearsal and live performance tapes recorded by Williams; and the Michael Brecker Archive, the collection of the most influential saxophonist since John Coltrane.

William Paterson also presents the popular Jazz Room Series, the longest-running campus-based concert series in the nation, now in its 37th season of concerts by renowned professionals and William Paterson student ensembles.  The series has won numerous grants from the National Endowment for the Arts and the New Jersey State Council on the Arts for its innovative programming, which encompasses the complete spectrum of jazz from bebop to avant-garde.   The University also presents the Summer Jazz Room, a weeklong series of concerts, in conjunction with the annual Summer Jazz Workshop for high school students, both in their 22nd year.

William Paterson University is a leading public university in New Jersey with more than 11,000 students enrolled in undergraduate and graduate academic programs offered by five academic colleges: Arts and Communication, Cotsakos College of Business, Education, Humanities and Social Sciences, and Science and Health. Located on 370 hilltop acres in Wayne, the university offers a wide range of learning opportunities in its classrooms, laboratories and studios, and provides housing for nearly 2,700 students. The institution’s 404 full-time faculty are highly distinguished and diverse scholars and teachers, including 41 Fulbright scholars and recipients of numerous other awards, grants, and fellowships. The institution’s more than 69,000 alumni can be found throughout New Jersey, the nation, and the world.