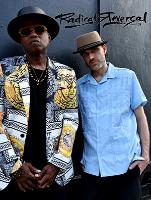 Radical Reversal is an experimental poetry band that explores how art can play a pivotal role in social justice while providing pathways for artists to give back. A collaboration between poet Randall Horton and composer Devin B Waldman, the artists perform original music and poetry that addresses social concerns with a focus on the criminal justice system, inspired by past experience of co-founder Randall Horton who is the only person in the United States with seven felony convictions and now has academic tenure at the University of New Haven. Their sound is undefinable and crosses many boundaries of music and spoken word. Other members of the band include Melanie Dyer, Taru Alexander, and Brendan Regan.

Randall Horton is a writer, poet, artist, and an associate professor of English at the University of New Haven who originates from Birmingham, AL and currently resides in Bloomfield, NJ. Horton is the recipient of the 2022 Creative Capital Award, the American Book Award for Oral Literature, the Gwendolyn Brooks Poetry Award, the Bea Gonzalez Poetry Award, a National Endowment of the Arts Fellowship in Literature, the GLCA New Writers Award for Creative Nonfiction for Hook: A Memoir, a Poet-in-Residence at the Civil Right Corpse, and a Soze Foundation Right to Return Fellow. His poetry collection {#289-128} was published by the University of Kentucky Press Northwestern University Press, and Dead Weight: A Memoir will be published by Northwestern University Press in 2021. Horton is on the Advisory Board of Pen America’s Pen Prison Writing Program. He is also co-founder of the social justice band, Radical Reversal and a member of the band Heroes Are Gang Leaders, a group whose unique blend of blues, jazz, funk, hip hop, go-go, R&B, soul, classical music, poetry, dramaturgy, and prose continues the legacy of Amiri Baraka. He has appeared on C-SPAN, NPR, CTNPR, and in countless journals, magazines, and radio shows.

Devin B Waldman is a multi-instrumentalist, composer, and music producer. He leads the group BRAHJA and is a co-founder of the groups Radical Reversal, Notable Deaths, and Diva of Deva Loka; and a member of the bands Heroes Are Gang Leaders, Land Of Kush, MoE, and Malcolm Mooney & The Eleventh Planet. Waldman has performed with artists such as Abiodun Oyewole, Patti Smith, William Parker, Nadah El Shazly, Godspeed You! Black Emperor, Thurston Moore, Hamid Drake, Janice Lowe, Mette Rasmussen, Charles Hayward, Yoshiko Chuma, Daniel Carter, James Brandon Lewis, Luke Stewart, and many others.