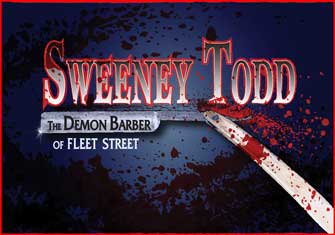 Music students at William Paterson University will present the well-known musical thriller Sweeney Todd: The Demon Barber of Fleet Street for four performances in Shea Center for the Performing Arts on campus in Wayne from November 3 to 6, 2022.

Sweeney Todd, with music and lyrics by the late American composer and lyricist Stephen Sondheim, who died in November 2021, and book by Hugh Wheeler. The musical tells the tale of an unjustly exiled barber, who returns to 19th century London seeking vengeance against the lecherous judge who framed him and ravaged his young wife.

The road to revenge leads Todd to Mrs. Lovett, a resourceful proprietress of a failing pie shop, above which, he opens a new barber practice. Mrs. Lovett's luck sharply shifts when Sweeney Todd's thirst for blood inspires the integration of an ingredient into her meat pies that has the people of London lining up.

The musical, which premiered on Broadway in 1979, won eight Tony Awards, including Best Musical, Best Book, and Best Score, and became a was a worldwide success. It features some of the most chilling music ever written for the stage.

"We felt it was important to honor Stephen Sondheim this year, who was one of the most important American musical theater composers of the 20th century,” says Christopher Herbert, vocal area coordinator and assistant professor of music, who serves as producer. “The show also deals with social justice and what happens when people prioritize revenge over forgiveness, which is a very timely topic for our students to explore.”

Performances of Sweeney Todd will be presented on November 3 and 5 at 7 p.m., November 4 at 5 p.m., and November 6 at 3 p.m. Tickets are $15 for the general public and $10 for students and members of the WP community. There is an additional charge of $5 for tickets purchased on the day of the performance. For tickets, visit wp-presents.org, or contact the box office at 973.720.2371 or boxoffice@wpunj.edu.