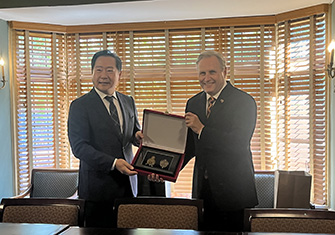 In a move to further globalize both institutions, William Paterson University and Kongju National University in South Korea entered into an academic exchange agreement this week, laying the groundwork for both a student exchange program and joint faculty research.

Since 2020, the two institutions have been building a relationship and engaging in global exchange enrichment activities in their undergraduate and graduate courses. For one, students in WP’s Sociological Theory and Environmental Anthropology courses have been exchanging class projects with KNU students. Additionally, WP graduate students pursuing a MEd degree in literacy interviewed KNU education majors and learned about the Korean education system.

With four campuses and approximately 19,000 students, KNU is the ninth largest among national and public universities in Korea.

“We are excited for this new partnership with Kongju National University, which extends the global reach of William Paterson,” said WP President Richard J. Helldobler. “In an increasingly interconnected world, the more opportunities we can provide our students to study with and learn from people from other nations and cultures, the better prepared they will be for successful careers and rewarding lives after graduation.”

Representatives from both universities were present at last week’s ceremony in Hobart Manor, including WP faculty who secured and are executing a 3-year grant from the Korean Studies Promotion Service to develop Korean global exchange and collaborative research programs on campus: Professors Carrie Hong (educational leadership and professional studies), Keumjae Park (sociology and criminal justice), and Angie Yoo (communication). It was through that grant that the relationship between WP and KNU began.

The professors also developed an interdisciplinary Korean Studies minor, which just launched this semester; they started a study abroad program for WP students this past summer, allowing them to attend Ewha International Summer College in South Korea for little to no cost through a scholarship process; and they have organized well-attended Korean cultural events on campus.