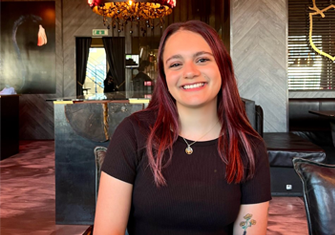 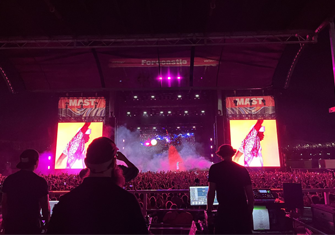 Theresa Abou-Daoud landed a dream opportunity when she was hired as a tour assistant for American rapper Tyler, the Creator immediately upon graduating from William Paterson University in 2022.

A big fan of live music, Abou-Daoud was an Honors College student who earned her bachelor’s degree in popular music with a minor in music and entertainment industries.

“I knew I wanted to go into the live music industry and then the pandemic hit and I didn’t really know where the industry was headed,” says Abou-Daoud.

Then last summer she took a WP music course called Backstage: the Business of Touring taught by two well-known tour managers in the industry. Abou-Daoud sought advice from one of the instructors, who at the time was the production manager for Tyler, the Creator and asked him numerous questions about the job. He invited her to shadow their production team for a show in New York City.

While still a student, Abou-Daoud was hired as a production assistant for their last two festival stops of the year. “It’s interesting to look back and realize that a year ago I was still a student and was working my first gig with Tyler, and now I’m on an international festival tour.”

Abou-Daoud, now 22, is currently a tour assistant for Tyler, the Creator during an international summer festival tour that includes dates in Denmark, Ireland, England, Switzerland, Belgium and Australia.

“I’m in Europe right now and six hours ahead of everyone I know. When I’m going to bed, my friends are just starting their afternoon.” Although being away from home so long and navigating the different time zones can be challenging, it’s all worth it, she says.

“The best part is meeting new people and seeing new places. You’re immersing yourself in a new culture and picking up little bits of every language of every place you visit. It’s just so amazing how much you can embrace in every new culture and climate.”

For example, Abou-Daoud adds, “I came to Copenhagen a week early and vacationed and I would never have done that without this job. I also had never been to Paris, the one place I always wanted to visit, and was able to spend a couple days there.”

When deciding whether to attend William Paterson or go to school in New York City, Abou-Daoud spoke with Professor David Philp and others in the music department. They explained how companies like Warner Music Group and Sony welcome WP students to take a tour every year and ask questions about the industry. “It made sense when I realized I didn’t have to go into the city to get the same education.”

“I would not be the person I am without William Paterson. It definitely changed my life and career for the better.”