Mom of 5 Graduates with Daughter in Class of 2022, Aims for Career Helping Latino Families in Need 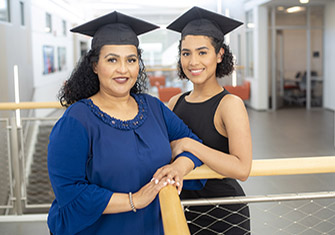 When Janais Martinez walks across the stage at the Prudential Center to receive her diploma, her mom will be there, like many other graduates’ moms. However, Minerva Martinez won’t be watching her daughter from the audience, she’ll be seated on the arena floor, wearing her own cap and gown. She, too, is a member of the Class of 2022.

“She should be very proud and I’m very proud of her,” Janais says of her mother. “I’m 22, and she came to this country when she was 22. Imagine me picking up and starting over in another country, starting a whole new life. She’s my mom, but I still see her as her own person—her struggles, her triumphs—and I am proud of this individual who happens to be my mom, who I’m so grateful for.”

“But I’m proud of her!” Minerva interrupts, explaining how she loves watching her daughter sing on stage in multiple languages and witnessing how she’s grown as a singer at WP. Janais has been selected to perform the national anthem at this year’s commencement ceremony. “I wasn’t going to go to graduation because I didn’t want her to feel embarrassed,” Minerva adds before Janais interjects, “No, that’s your moment! You have a double major!”

Minerva attended Universidad Tecnologica de Santiago (UTESA) in the Dominican Republic starting at age 16. An education major, she was hired to teach fourth and fifth grade as a classroom teacher in a private school while she pursued her own studies. “It’s been my life: education,” says Minerva, who currently works as a substitute teacher in the family’s hometown of Passaic. “I’m a school person all my life.”

Therefore, she knew when she got to the United States that she wanted to go to college and earn a degree. First, though, she had to learn English. “I bought the newspaper every day. I didn’t know what it said, but I bought it and highlighted the words I didn’t know,” Minerva explains. “I watched American programs, I watched the news, I talked to people even though I didn’t even know what I was saying. If one person didn’t want to talk to me, I knocked on someone else’s door and talked to them.”

She took foundation classes in English, and then moved onto Passaic County Community College, where she completed a two-year ESL (English as a Second Language) program and then graduated from a two-year associate’s degree program in human services, wherein she also earned a certification in mental health. However, the combined four years’ worth of education took her more than a decade to complete as her time and attention were needed elsewhere: In 2005, the fourth of Minerva’s five children, her then two-year-old son Jonathan, was diagnosed with acute lymphoblastic leukemia. Sadly, it was the first of the little boy’s three run-ins with cancer. He spent numerous years undergoing radiation and associated medical treatments, and when he needed a bone marrow transplant, big sister Janais, who was 12 at the time, was his donor. The procedure worked, and Jonathan has been cancer-free since 2011.

“When cancer knocks on your door, the impact, it’s not just on the patient, but especially when they’re at an early age, the impact is on the parents and the siblings,” Minerva says. The experience brought her to a mental health professional for the first time in her life; and for two years, she brought a psychologist into the home for two hours per week to provide family therapy.

“When Jonathan got sick, I saw so many families that were struggling, and I saw that clinical and counseling psychology was a way that I could help people find themselves, find their voice and discover the potential they have,” she says. As a Latina and fluent Spanish-speaker, Minerva is especially passionate about counseling other Hispanic immigrants who often don’t pursue mental health treatment due both to stigma and overall unawareness. “I love to teach,” she adds, about her original career plans, and notes that as a counselor, she will, in essence, be a teacher. She knows firsthand, as she has gained relevant professional experience as a social worker with Family Support Organization (FSO) of Passaic County, where she has also served as a facilitator for their support groups.

Though the road to her associate’s degree was long, Minerva whizzed through her bachelor’s coursework at WP, and in two years, earned enough credits to graduate, serendipitously, with her daughter. She starts coursework for the University’s master’s degree program in clinical and counseling psychology in the fall.

Janais will be working with a private voice teacher and mentor after commencement, and is pursuing various music internships and residency programs across Europe. She has been accepted to a prestigious opera studies festival in Trentino, Italy, where she will perform this summer in Mozart’s Die Zauberflöte.

Minerva’s eldest child and Janais’s older brother, Joshua, graduated from WP in 2020—also as a music performance/classical voice major. He is currently working professionally as a musician.

All three attended William Paterson through the Educational Opportunity Fund (EOF) program, which provides academic support services and financial assistance to approximately 450 University students annually who come from educationally and economically disadvantaged backgrounds. Mom and daughter credit the program’s counselors, and its overall sense of “community,” with helping them to succeed academically and personally.

“My experience here has always been amazing,” Janais says of William Paterson University, explaining that she understands now, looking back at a wonderful four years full of growth, that she was destined to be here all along.

Janais’s message to other immigrants and first-generation college graduates: “What is meant for you will come to you, but only if you do your part,” she says, reflecting on the importance of sacrifice and the inevitable but transient periods of struggle.

“The only limits you have in life are the limits you put on yourself,” Minerva adds. “Be determined, be defined, and persevere.”