69-Year-Old Alum—a Retired Chemist—Returns to WP for Degree in Music, Graduates as Oldest Member in Class of 2022 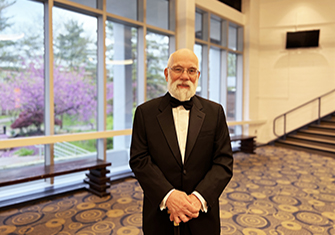 Thomas Scalora, before a concert choir performance at the Shea Center on May 6.


Thomas Scalora, before a concert choir performance at the Shea Center on May 6.

Thomas Scalora ’78, ’22 has been interested in music since his boyhood days. His father told him he’d never make a living as a musician, though, and he certainly couldn’t divulge his love of the ballet and symphony to the neighborhood boys in his hometown of Paterson, New Jersey. Instead, he kept music “under wraps,” learned how to play accordion, guitar, cello and clarinet on his own, and focused on math and science in his studies—as his father wished.

This month, at 69 years old, the retired analytical chemist and proud grandfather is graduating with his second bachelor’s degree from William Paterson University, this time in music studies. He is the oldest member of the Class of 2022. Now of Jefferson Township, New Jersey, Scalora first graduated from the University in 1978 with a bachelor’s degree in chemistry.

“Music has been—it’s always been—my refuge. Now, it’s not just my refuge, it’s my companion,” Scalora says. “This was a labor of love.”

After his first WP commencement, Scalora went on to a successful career in the pharmaceutical industry—working with the likes of Johnson & Johnson and GlaxoSmithKline—where he performed research on new drugs, deconstructing them to ensure their safety and efficacy. Later in his career, Scalora worked on the regulatory side, liaising with the Food and Drug Administration as an internal watchdog, which often brought him to Washington, D.C.

All the while, he tried to study music, but with a fulltime career and two children, he never had the time. “I could play the notes but never really could understand the music, and I’m that kind of guy—I need to know. My being a scientist, naturally I’m interested in that,” Scalora says.

Then, in his 40s, Scalora was in a car accident that resulted in a spine injury and extensive nerve damage to his right arm and hand, limiting his use of both to this day. Without two fully functional hands, he could no longer play a musical instrument. He found a way to continue performing his job in science, though, until he retired at 64.

In 2016, thanks to the free time that comes with retirement, Scalora started with one music class per semester at WP “to see if the brain was still working,” he jokes, “but I was just having so much fun—oh my God, so much fun—so I decided to matriculate. My friends, they were like, ‘Dude, you worked for 50 years to retire and you’re going to school?’ My grandchildren, the oldest is 10 and the youngest is 5, are like, “He wants to go to school? You have homework?’ But it’s been wonderful.”

Due to his physical disability, Scalora was given a waiver for the music major’s piano class requirement, taking other classes in its place. He also picked up a minor in digital music creation and arranging so that he can make music on the computer instead of on an instrument. For the music department’s ensemble requirement, since Scalora could no longer play an instrument, he sang in the concert choir—even though he’d never sung a note of classical music in his life. During his music theory class, he had to retrain himself to write with his left hand because he can’t use his right.

Scalora’s 41-year-old son is an English teacher and singer/songwriter and his 39-year-old daughter is a special education teacher who uses music with her students. “So the love of music got diffused into them,” he says. Evidently, his love of education did, too. After commencement, Scalora hopes to volunteer as an assistant band director in an area high school.

“I don’t want to get paid, I don’t want to take anything out of the system, I just want to put something in,” he explains. “I want to tutor the kids, help them if they’re struggling, help the band director get by, just help enrich the music and make sure the music doesn’t die.”