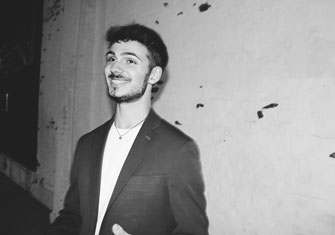 Caelan Cardello, 21, a senior year jazz performance major at William Paterson University, was selected as a finalist to compete for the prestigious national award presented by the American Pianists Association based in Indianapolis, Indiana.

Cardello is one of five finalists who will compete for the Cole Porter Fellowship, given every four years to an American jazz pianist at the conclusion of the organization’s unique 13-month competition process.

“This is such an honor,” says Cardello. “I know that I’ll receive a lifetime’s supply of knowledge throughout this process, and I’m excited to work with and hear the other finalists. I’m thankful to everyone at William Paterson who helped me through the audition process, especially Professors Bill Charlap and David Demsey.”

“Caelan Cardello is a natural…a great talent with an innate ability to communicate with other musicians and with the audience,” says Bill Charlap, director of the University’s Jazz Studies Program and internationally acclaimed pianist. “Caelan’s playing is uplifting and effervescent,”

Over the course of five months, from September 2022 to February 2023, each finalist will appear on stage at the Jazz Kitchen in Indianapolis for a trio/solo performance and completes a three-day residency at an Indianapolis-area high school. Cardello is scheduled for his first live, juried performance on January 28, 2023. The winner will be announced at the Gala Finals at Hilbert Circle Theatre in Indianapolis on April 22, 2023

During the competition process, the public can watch the juried performances in person or via livestream on americanpianists.org/live, the American Pianists Association's channel on YouTube and its Facebook page.

Born into a musical household in Teaneck, N.J., Cardello began playing piano at the age of 5. Throughout his middle and high school years, he performed with many jazz greats including Christian McBride, Jimmy Cobb, Ravi Coltrane, Dee Dee Bridgewater, and Wynton Marsalis.

Cardello recently performed at Dizzy’s Club Coca Cola at Lincoln Center with the William Paterson Jazz Orchestra. He has also performed at venues in NYC such as Smoke Jazz Club and The Jazz Standard, as well as the Detroit Jazz Festival, among other venues. He won the BMI Foundation’s Future Jazz Master award in 2021. Other occolades include 2018 recipient of the prestigious James Moody Scholarship, winner for regional National YoungArts, and 2016-17 All State Jazz Band pianist.