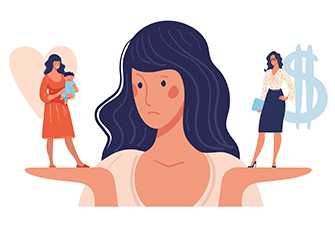 Despite its advantages—such as not having to commute and all-day access to one’s home kitchen—the study published in the journal Community, Work and Family discovered that working from home can increase, rather than decrease, feelings that work demands and family demands conflict with one another.

On the contrary, working from home was found to reduce work-to-family conflict for men. The study suggests that this could be due to men traditionally sharing less of the housework and family-related activities or due to the differences in their work-family ideals compared to women.

“There is a lot of overlap between work and family because of the 24/7 economy we’re in,” says Yucel, who has dedicated the past four years of her research to topics centered on understanding work-family interface. “Although most families are less traditional than before, we are still finding overall gender differences in how work and family are related; the workload issues are still traditional.”

“Therefore, if family already creates conflict in work for women, working from home—in the same space as the family—can have a negative effect on their wellbeing,” Yucel adds.

She points out that working from home is not, in and of itself, an indicator for an employee’s feelings of work-to-family or family-to-work conflict, though. How much power employees have in controlling the activities of their workday, how much they control their schedule, and the overall workplace culture surrounding issues of family are also important.

Yucel and Chung coincidentally undertook their study right before the COVID-19 pandemic, which thrust scores of workers internationally into having to work from home.

“Although working from home is a timely topic in most workplaces right now, having to work from home for a set amount of time per week is not always positive,” Yucel stresses. “The important thing in terms of employee wellbeing is that arrangements are flexible. Maybe one employee prefers 30 hours in the office and only 10 at home. There are lots of policy implications here for employers and stakeholders.”

Data used in the study about workers and families came from Germany. Yucel is currently exploring the effects of working from home using Census Survey data in the U.S. She suspects the negative effects on working mothers in the U.S. will be more pronounced yet due to the U.S. government providing less paid parental leave. Additionally, she points out, while the majority of working mothers in Germany work part-time, the majority of U.S. mothers are likely working fulltime and, perhaps, overtime.