Photograph by Professor Robin Schwartz is Featured in The New York Times Magazine on March 20, 2022 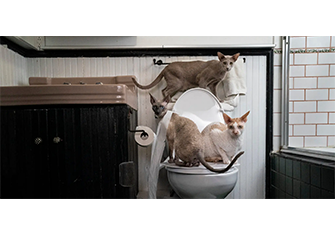 A photograph by Robin Schwartz, professor of photography at William Paterson, was featured in The New York Times Magazine on Sunday, March 20, 2022. The photo, which appears on page 18 in the print version, accompanies the issue’s Letter of Recommendation column, “How to Toilet-Train Your Cat” by Brent Katz, and is also featured online at nytimes.com with the same headline.

The author of the column was inspired by the legendary jazz composer and bassist Charles Mingus, who grew tired of coming home to an overflowing litter box and in 1954 wrote up a solution that became a pamphlet, “The Charles Mingus CAT-alog for Toilet Training Your Cat.”

Schwartz is a 2016 Guggenheim Fellow in Photography. Her award-winning photography and images of animals have appeared in museums and galleries around the world. Her photographs have previously been published in The New York Times Magazine, Time Magazine LIGHTBOX, The New Yorker, Oprah, and National Geographic, among numerous others.