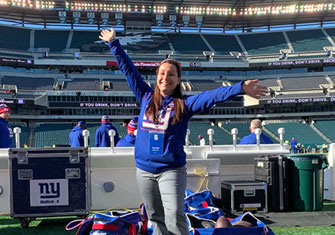 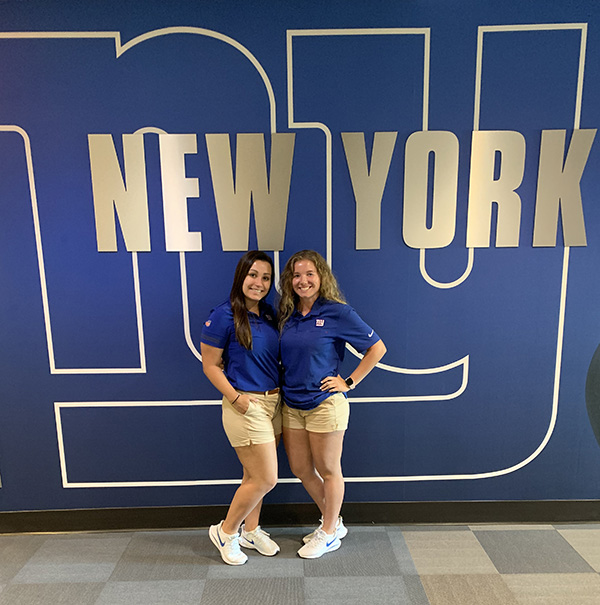 Growing up as a fan of the New York Giants football team, athletic training and exercise science major Jenna Daily ‘22 was eager to apply for a chance to work alongside some of the best sports medicine professionals in the industry.

For the past 23 years, WP has sent two standout students to work alongside the Giants’ certified and licensed Athletic Trainers as part of a written Affiliation Agreement between the school’s athletic training education program and the Giants’ storied NFL franchise.

As part of the internship, both Daily and Mitchell were able to utilize the skills they acquired throughout their coursework and gained practical experience in helping the Giants’ Athletic Trainers to prevent, diagnose, treat, and rehabilitate both acute and chronic injuries.

“They never hesitated to let me jump in and work with the athletes,” says Daily, who worked with the Giants during minicamp and through the regular season after being called upon to begin her internship early. “It was amazing to work with players and Athletic Trainers of that caliber in such a positive and respectful setting. It really runs like a well-oiled machine and I got to witness it firsthand.”

Daily also attended her first NFL game - as a fan or otherwise - working on the Giants’ sidelines as an athletic training intern during her participation in the program.

“I was assigned to bench maintenance, which consisted of everything from making sure players stayed hydrated to locating the correct person if one of the players needed medical or equipment assistance,” says Daily. “There was no better feeling during a game than when the team scored and the sideline and crowd erupted. Being there during games was one of the most invigorating feelings that I do not think I will ever forget.”

For Mitchell, who interned for the Giants’ organization during summer workouts and the preseason, assisting the Giants’ Athletic Trainers with cutting edge equipment such as the high-powered laser therapy machine and being given the freedom to create her own rehab exercises were among the highlights of her time with the team.

“They really let me do a lot. From assisting with the ultrasound machine, taping and helping relax the players’ muscles with the massage gun, and also bringing them through all of the different modalities–it really checked all of the boxes,” says Mitchell. “It’s also just cool to see and experience the everyday feel of an NFL team’s sports medical team.”

All of the WP interns’ activities were closely supervised by the Giants’ Athletic Training Staff.

Jaclyn Morrissette, assistant professor and director of the athletic training and sports medicine programs at William Paterson, highlights the rewarding aspects of having a working relationship with a major market NFL franchise.

“It’s very rewarding in terms of job placement, providing such a diversity of experiences to our students in a more fast-paced and high-stakes environment,” says Morrissette. “Students learn Athletic Trainers’ role as part of an entire sports medicine team, and get experience with different resources that are available to athletes at the professional level. This allows them to market themselves as holding unique perspectives as young professionals entering the athletic training field.”

Both due to complete their bachelor degrees this May, Daily and Mitchell already have plans in motion for post-graduate life.

While Daily is drawn to high school sports and plans to pursue a career in that setting, Mitchell has accepted a position as a graduate assistant at the University of South Carolina. However, both would be open to accepting a position within the NFL, should the opportunity present itself someday.

“If the NFL called, I would not hang up,” says Daily.

This academic year, both scholarships went to WP students. Daily received the Jack Weakley District 2 Scholarship and Mitchell was the recipient of the Richard Malacrea College Scholarship.