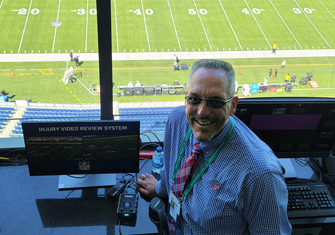 Rehberg's post above the football field, equipped with monitors and replay technology

William Paterson University Department of Kinesiology Professor Robb Rehberg will be inducted into the National Athletic Trainers’ Association (NATA) Hall of Fame—the highest honor in the Athletic Training profession—for his influence on and advancement of the profession within the State of New Jersey, the Association announced this week.

“I am beyond humbled to join a distinguished group of professionals whom I have admired throughout my career. To be recognized by the profession I love so much is truly an honor of a lifetime,” Rehberg says.

Rehberg, who teaches courses in athletic training and sports medicine at WP, is a medical consultant and coordinator of the ATC (Athletic Training Certified) Spotter program for the National Football League. This past weekend, he worked his third Super Bowl.

He is also a subject matter expert for emergency care for the National Safety Council; President/CEO of Sport Safety International, which provides education and resources on head injury prevention and treatment; and co-founder of The Rehberg Konin Group, a consulting firm specializing in health care, sports, and academics.

“I’ve worked in nearly every job setting possible for an athletic trainer, and each experience has been rewarding and has made me a better educator, as my ability to bring those experiences into the classroom helps better prepare students for their careers as health care providers,” Rehberg says. “My work with the NFL to advance player health and safety has been an especially great teaching tool because that work is both unprecedented and truly cutting edge. I’m proud to be a part of it and excited to expose our students to it.”

Rehberg also has a history of service in the athletic training profession as a volunteer in elected positions with NATA, where he has been a district treasurer and member of the Foundation Board of Directors, the Eastern Athletic Trainers’ Association, where he served as treasurer, and the Athletic Training Society of New Jersey, where he was president from 2007 to 2009.

“My favorite part of my job at WP is inspiring students to take the knowledge and skills they learn in our program, go in their own direction, and make their own mark on the profession,” Rehberg adds. “With the rapid changes in both health care and technology, today’s athletic trainers can work in any setting they can imagine. And in some ways, we’re preparing our students for jobs in athletic training that don’t yet exist, but will soon. I’m living proof of this, since the work I do with the NFL did not exist 10 years ago. There’s never been a better time to be an athletic trainer.”

The NATA Hall of Fame induction ceremony will take place during the Association’s annual Clinical Symposium and Expo in late June.