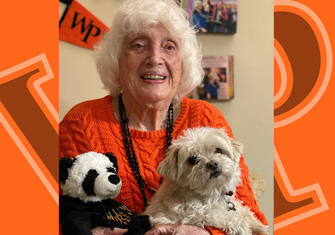 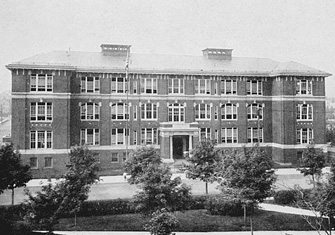 Ruth (Kaufman) Davis ’40, of Bergenfield, New Jersey, will turn 103 years old on January 29. She is believed to be the oldest living graduate of William Paterson University.

Her freshman year, 1936-1937, marked the first year that what was once known as the Paterson City Normal School, founded in 1855 to professionally train teachers working in the City of Paterson, transitioned to a four-year, degree-granting institution known as New Jersey State Teachers College at Paterson. That institution eventually became the University we know today.

“It was hardly a college campus,” Davis says, explaining that Paterson State operated out of the basement and two upper floors of Paterson School No. 24. “There was a little park right across the narrow road from the building, and that was our campus.”

Today’s WP campus, which left the City of Paterson for the Township of Wayne in 1951, spans 407 acres.

Davis’s graduating class consisted of 42 students. The University’s Class of 2021, by means of comparison, had nearly 2,400 students.

About 25 classmates shared Davis’s major of teacher education; the others were among the first to pursue the institution’s brand new general college curriculum. They were subsequently referred to as “The Experimentals,” she says.

“We were a very close-knit group,” Davis continues, of her fellow education majors. “We traveled, the way you do in grammar school, together: We went from one class to another as a group.”

“Of course, everybody is gone now,” she adds, of her beloved classmates. The alumna treasures her Class of 1940 yearbook, which she still peruses, 81 years later, even though she is largely blind. “I really can’t see the photos, but I can glimpse and I have an idea of who it is,” she explains.

Beyond “friendships that lasted many years,” WP also left Davis with two lifelong loves: the love of teaching and the love of the music of Gilbert and Sullivan, the latter thanks to the operettas Paterson State students staged annually; Davis performed in all four during her college career. She sings the songs she learned then to this day.

After graduating, Davis worked professionally as a teacher for 10 years, in fourth- through sixth-grade classrooms, and only gave up the profession because, as was common in the 1950s, her husband wanted her to stay home.

“My first teaching job was in Bergenfield, and there was strip of paper pasted onto my contract—that was the addendum—that said if you married within the year, you would not be rehired,” Davis says. She did marry, and she did lose that job.

Three years into her new teaching position in neighboring Dumont, Davis received a call from the principal of Haworth’s grammar school. His last name was Kaufman—same as her maiden name, though there was no relation. When she was still a student at Paterson State, college staff had accidentally mailed one of her report cards to him.

“I was a very good student, and he remembered what good grades I had on that report card,” Davis says. “When he heard I was teaching in Dumont, he contacted me and said, ‘Whatever you’re getting, I’ll give you more if you come to Haworth.’”

Davis, who grew up in Haworth and attended that very grammar school, was “thrilled” and took him up on the offer.

“I loved teaching. I just loved it. It was fun every time I went to class,” she says.

Her college-fueled love of singing helped make it so. “We’d save a few minutes at the end of each day to sing, so the kids would leave singing,” Davis recalls. “I’d say, ‘Ok, what do you want to sing today,’ and they’d invariably say, ‘Home on the Range’ because they knew I didn’t like that song. It was great fun.”

Today, Davis enjoys cueing up and singing along to the songs of her youth, including those of her favorite Guy Lombardo, on her beloved Amazon Alexa devices. As she can no longer see well enough to read, she uses the technology to listen to audio books, too.

Davis also spends time writing what she refers to as verse. “I don’t dignify it by giving it the title of poetry,” she jokes. She has a box full of her writing and seamlessly weaves her verses into conversation.

My secret is a daily glass of wine

And lots of laughing, loving, and giving.

Giving, she says, “of yourself as well as financially” is very important to her. Davis is a member of the University’s Heritage Society, a distinction given to those who have donated funds for 20 years. Additionally, though she left the teaching workforce, she funneled her love of the craft into several volunteer positions working with young children, her favorite of which was the time she spent caring for babies in the nursery of a childcare center, in her 70s, in Boca Raton, Florida—where she and her late husband used to spend their winters.

“Her love of teaching never diminished. It is still so palpable today,” adds son Sam Davis. His mother leads ongoing English classes for her two foreign-born in-home aides, and doesn’t hesitate to correct family members’ grammar. “She credits William Paterson University with fostering her enduring love for this calling. It is a key secret of her longevity and joie de vivre. Thank you, William Paterson University.”

Due to the pandemic, Davis will celebrate birthday No. 103 just as she celebrated No. 102: with a Zoom party attended by family and friends. Davis has two living sons; a third, her oldest, passed away in his 80s. Davis also has six grandchildren (ages 26 to 45) and one great-grandchild.

Pandemic or not, grandchildren are always welcome, and hers will likely visit in-person for her birthday, Davis says. She talks with her grandchildren regularly, and is very proud of their strong relationship.

Of her friends, Davis says she is “very blessed with many.” She has a best friend aged 95 and “then they go down into the 80s. I don’t have many contemporaries left, but I don’t think about that. I think about the people I have left,” she says. “Life’s good. It’s not exciting for me these days, but it’s good.”’

In discussing a favorite outfit—an orange sweater with black beaded necklace very befitting of her alma mater—she adds of WP, “It did so much for me. It all comes back so vividly and so delightfully. It wasn’t college the way you know it now, but I just enjoyed it so much.”