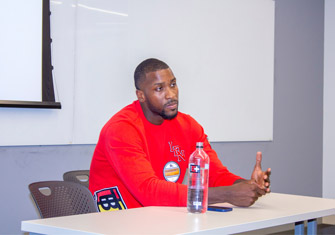 NBA player Michael Kidd-Gilchrist shared his very personal story as a person who stutters with graduate students in William Paterson University’s communication disorders and sciences program on October 4, emphasizing the importance of the trusted relationship between a person who stutters and their speech language pathologist (SLP).

“It’s important for future speech language pathologists to know that you are here to change lives,” he told the students. “At first, I didn’t want anyone to know about my stutter. When I entered speech therapy, I told my therapist that I didn’t want anyone to know. Today, I want to share my story and see my stutter as a gift that I have embraced because now I can help others including those who are getting into the field of speech language pathology.”

“This is a special opportunity for these future speech language professionals to hear the personal story of someone who stutters,” says Dr. Jim Tsiamtsiouris, professor of communication disorders and sciences. “We are so honored that Michael is willing to openly share his experiences with us.”

Kidd-Gilchrist played in the National Basketball Association for the past 12 years. While spending time in the NBA “bubble” in 2020, he began reflecting on his own personal journey as a person who stutters. He considered how to turn his knowledge and experience into actionable and meaningful ways to help others who stutter. In 2021, he founded Change & Impact, Inc., a stuttering initiative with a mission to improve access to health care and expand services and resources for those who stutter. Change & Impact is focused on raising awareness for stuttering, bringing together key stakeholders to improve the quality of life for those who stutter, and working on behalf of the stuttering community to improve insurance coverage for speech therapy.

According to the National Institute on Deafness and Other Communication Disorders, roughly three million Americans stutter. While stuttering affects people of all ages, it occurs most often in children between the ages of two and six as they are developing their language skills. Approximately 75 percent of children recover from stuttering. For the remaining 25 percent who continue to stutter, stuttering can persist as a lifelong communication disorder.

Kidd-Gilchrist says that while he has learned strategies to deal with his stuttering, his biggest success has been in accepting that he is a person who stutters, and using his platform as an athlete to serve an advocate for the stuttering community. “I can’t change the world, but I genuinely want to help this community,” he said. Kidd-Gilchrist regularly appears as a guest speaker at colleges and universities across the nation that offer undergraduate and graduate programs in the disciplines of audiology and speech-language pathology. He also makes appearances as a guest speaker at camps and conferences focused on stuttering.

William Paterson offers bachelor’s and master’s degrees in communication disorders and sciences. The program provides a comprehensive evidence-based approach to the theoretical, practical, and ethical aspects of the field of communication sciences and disorders which also fosters research and scholarship. Students receive hands-on experience working with real-life clients at the on-campus Speech and Hearing Clinic, a working clinic that is a primary practicum site for graduate students, allowing them to provide speech-language pathology services to children and adults. The master of science program in speech-language pathology is accredited by the Council on Academic Accreditation in Audiology and Speech-Language Pathology (CAA) of the American Speech-Language-Hearing Association. 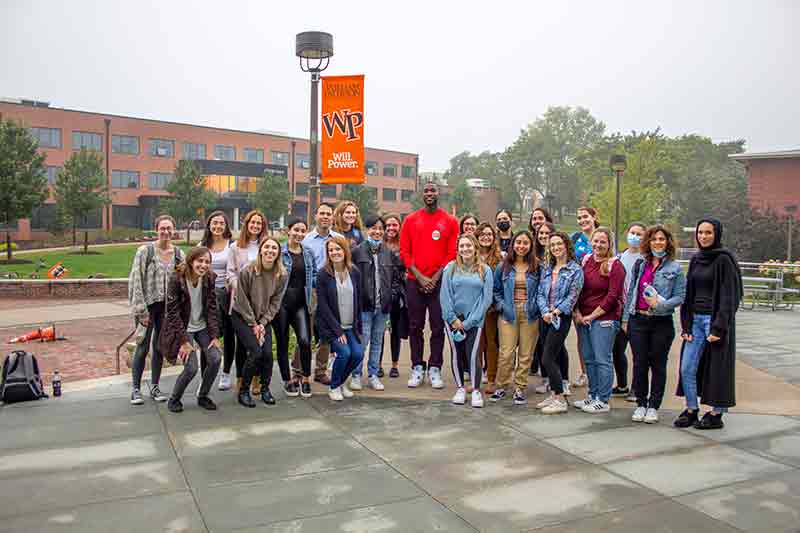