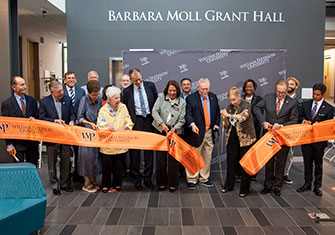 William Paterson University in Wayne renamed the former Preakness Hall academic building on campus in honor of the late Dr. Barbara Moll Grant ‘54, an alumna and professor emerita of education, during a dedication ceremony held on Thursday, September 9 in recognition of Dr. Grant’s generous philanthropic support of her alma mater.

The gift of $5 million from Dr. Grant’s estate will benefit an endowed scholarship fund that will support numerous students in multiple disciplines across the University.

The building, to be known as Barbara Moll Grant Hall, was completely renovated in 2017 as part of a long-term plan that saw the modernization of the University’s facilities in the academic core of the campus. The 58,000-square-foot building houses four state-of-the-art kinesiology laboratories, 14 smart classrooms, a 90-seat auditorium, numerous small and large group study rooms, the Writing Center, and faculty offices for the Department of English and Department of Philosophy.

“Dr. Grant was a committed educator, a respected scholar, an accomplished author, and a leader in this campus community. She cared deeply about the students of William Paterson, when she was teaching them and throughout her life,” said President Richard Helldobler at the event. “Given the range and depth of Dr. Grant’s many contributions to William Paterson – as alumna, professor, and benefactor – her name and memory are sure to live on across this campus that she loved so much. I am pleased that – with the naming of Barbara Moll Grant Hall – it will do so right here in the heart of campus, for all to see.”

“Through this transformative gift to her alma mater, students from across the institution and in multiple disciplines will benefit from the scholarship support that will allow them to fulfill their dreams of attaining a college education,” said Michael Seeve, chair of the William Paterson University Board of Trustees. “We are so grateful for Dr. Grant’s generosity and support for the William Paterson University, and on behalf of the Board of Trustees, it is my honor to recognize her today.”

Dr. Grant’s sister, Dr. Dorothy Grant Hennings, spoke of the family’s connection to Paterson in her remarks, The Grants and Molls: An Ode to Ancestors and Paterson Silk; their parents, William Albert Grant and Ethel Moll Grant, were silk manufacturers. “Those names are woven into the silk fabric of Paterson, the city where William Paterson University began,” she said. “(My sister’s) name embodies what Paterson was when it was the ‘Silk Capital of America;’ (it) tells what can be achieved with a Paterson degree.”

“Now,” she added, “think of students, an endless stream of women and men…Grant Scholars marching into the future to make a more wonderful world. What a perfect picture. What a powerful picture. What a legacy to leave.”

Dr. Grant, who died in 2019 and was a long-time resident of Wyckoff, New Jersey, earned a degree in 1954 from what was then the Paterson State Teachers College, and went on to earn a master’s degree in reading education from the University of Virginia in Charlottesville and a doctorate in reading education from Teachers College, Columbia University, in New York. She began her career as an elementary school teacher in Glen Rock, where she taught for nine years.

In 1963, she joined the faculty at her alma mater as a reading instructor in what later became the College of Education at William Paterson. During her tenure at the University, she coauthored two books with her sister. Dr. Dorothy Grant Hennings: The Teacher Moves, published by Teachers College Press, and Content and Craft: Written Expression in the Elementary School, published by Prentice Hall. She was the founding member of the Pi Lambda Theta honor society chapter at William Paterson and held a leadership role in the organization for many years, speaking at national conventions as a representative of the William Paterson chapter. Upon her retirement from William Paterson in 1998, Dr. Grant was awarded the title of professor emerita.

Dr. Grant continued to be closely involved with the University until her death in 2019. She served for many years as a member of the Hobart Manor Revitalization Committee, and attended many events on campus. Her philanthropy began in 1980 with a gift to the Annual Fund, and she later established the Barbara M. Grant Scholarship in 2005 to provide support for a student in the College of Education. And, she very generously remembered the University in her estate plans.

“Her commitment to (her students) and to this University was evident in ways small and large – from her continued involvement with William Paterson long after her retirement, to the incredibly generous investment in our students that we recognize today,” said President Helldobler.