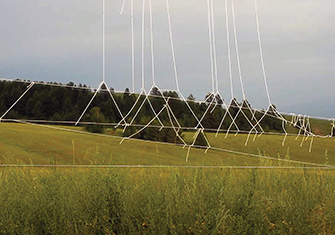 The marking of time, the dominance of nature, and the quest for knowledge as Mongolian nomadic lifestyles and traditions shift due to climate change are the focus of a new exhibition of video and installation art, Sierra of Creation, at the William Paterson University Galleries in the Ben Shahn Center for Visual Arts from September 1 through December 3, 2021. Gallery hours are Tuesday through Friday from 11 a.m. to 5 p.m., and on Sunday, October 17 and Saturday, November 13 from 9 a.m. to 2 p.m. Admission is free. An opening reception for the exhibit will be held on Thursday, September 16 from 4 to 6 p.m. A virtual conversation with the exhibiting artists will be held on Wednesday, October 13 from 7 to 8 p.m.

Tuguldur Yondonjamts was inspired by the scientists’ use of sytematic methodology to study nature during their field research. In his video, Structural Observation of the Valley of Marmots (2019), he emulates a scientific approach to documenting scenes in nature such as the moon’s reflection on water, rain falling on a tent, water rushing in a river, and swarming insects. He explores the passage of time and the impact of natural events that are preserved in the region’s harsh climate.

Bat-Erdene Batchuluun was inspired by a conversation with archeology professor Jargalan Burentogtokh, who identified the strata of an excavation as human or nature in seemingly endless repetition. Batchuluun’s video Empty (2019) presents real-time and time-lapse footage of the excavation site, juxtaposing subtle and dramatic alterations to the landscape over time. The artist explains that “human actions, lives, and traces disappear in nature…and new ones appear and disappear again.”

Munkhbolor Ganbold’s time in the Tarvagatai River Valley made him wonder what we can recover by excavating any given place or circumstance. In his video The Wind of Time (2020), Ganbold depicts family portraits that fade in and out of view accompanied by ambient electronic music. The individual portraits, possibly of ancestors, never come into sharp focus, suggesting the impossibility of recouping the past. The mixed media work Moon = Moment (2019-21) was assembled from both tangible materials and ephemeral impressions the artist collected during his time in the field.

This project was initiated by Nicole Davi, a William Paterson University professor of environmental science in order to spread public understanding of her ongoing research to develop millennial-scale climate histories using tree-ring records. “Even though this body of work is based on research conducted in the distant Bulgan Province of Mongolia, it prompts us to draw parallels across cultures and nations,” Davi says. “Sub-arctic regions including Mongolia have experienced rates of warming that are so far unprecedented. Similarly, New Jersey is experiencing rising temperatures and increasing rainfall.”

This exhibition was organized by Art Space 976 (Ulaanbaatar, Mongolia) as an initiative of the U.S. State Department’s STRAX program to highlight the significance of U.S. research programs and to promote diplomacy, in association with a grant from the National Science Foundation Office of Polar Programs’ Arctic Social Science Award #1737788.

Sierra of Creation is one of two exhibitions on view concurrently in the William Paterson University Galleries. On view in the Court Gallery is the annual Faculty Exhibition.

Bat-Erdene Batchuluun (b. 1983, Ulaanbaatar, Mongolia) lives and works in Ulaanbaatar. He earned his BFA from the Mongolian University of Fine Arts and Culture, Ulaanbaatar (2007), and attended the Arts Council of Mongolia’s Film Production Design Workshop (2009). He has exhibited extensively in Mongolia and internationally in the Netherlands, Norway, and South Korea. He received the Grand Prix award at the Altan Khalis Independent Film Festival (2014).

Munkhbolor Ganbold (b. 1982, Ulaanbaatar, Mongolia) lives and works in Mongolia. He attended the Green Horse Mongolian Contemporary Art College (1999), followed by the Mongolian University of Fine Arts and Culture, Ulaanbaatar (2002) and Muthesius Fine Art College, Kiel, Germany (2007). He has exhibited internationally in Mongolia, Sweden, the United States, Italy, South Korea, Taiwan, China, and Germany. In 2017 he represented Mongolia in the 57th Venice Biennale. He has received grants from the Alliance Française, the Swiss Agency for International Development, and the U.S. Embassy in Ulaanbaatar.

Tuguldur Yondonjamts (b. 1977, Ulaanbaatar, Mongolia) lives and works in New York and Ulaanbaatar. He received a BFA in traditional Mongolian painting from the Mongolian University of Arts and Culture, Ulaanbaatar (1997) and earned a BA at the University of the Arts, Berlin (2004). He subsequently received an MFA from Columbia University (2014). His solo exhibitions include Hibernating Tattoos Guarding the Sweat of the Sun, Richard Taittinger Gallery, NYC (2017); Between Two Giants, American Museum of Natural History, NYC (2015); and An Artificial Nest Captures A King, Arts Catalyst, London (2018). His work has been featured in the group exhibitions Mystical Geographies and Landscapes of Deep Time, Pinksummer Gallery, Genova, Italy (2019); Tavan Tolgoi, Greengrassi Gallery, London (2018); Is/Inland, Kuandu Museum of Fine Art, Taipei (2018); Contemporary Art of Mongolia VI, 976 Art Space, Ulaanbaatar (2018); Open Sessions 7: Hibernating Plan, The Drawing Center, NYC (2016), and In Practice: Fantasy Can Invent Nothing New, Sculpture Center, Long Island City, NY (2016). Yondonjamts is the recipient of a Fulbright Scholarship (2012-2014) and grants from the Trust for Mutual Understanding (2016) and the Arts Council of Mongolia (2012). He has participated in numerous residencies including Sharpe-Walentas Studio Program, Brooklyn, NY (2016); Residency Unlimited, Brooklyn, NY (2016, 2012); Civitella Ranieri Residency, Umbria, Italy (2015); Lower East Side Studio Program, NYC (2015); Tropical Lab, Singapore (2014); and Art Omi, Ghent, Belgium (2010)