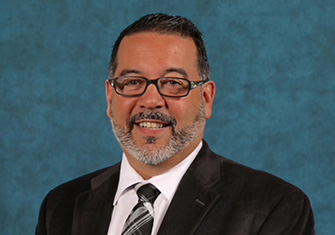 Francisco Díaz, associate vice president for student development at William Paterson University, has been named the recipient of the 2021 Fred Turner Award for Outstanding Service to NASPA for Region II. The award was presented during NASPA’s recent 2021 Virtual Conference.

The Fred Turner Award for Outstanding Service to NASPA, named in honor of former chair of the NASPA Board of Directors (1958- 1959), honors a member who has served in leadership roles at the state, regional, national, and/or international levels of NASPA for a sustained period of time. This award is presented to an individual who has demonstrated outstanding achievement to the student affairs profession and Region II over an extended period. In addition to the regional recognition that accompanies this award, the recipient will be considered for the National NASPA Fred Turner Award for Outstanding Service to NASPA.

“I joined NASPA many years ago in hopes of networking with peers throughout the country and found a welcoming group of dedicated professionals committed to supporting student success who helped me grow in many ways,” says Díaz.  “The work we do at NASPA truly affects the lives of our students. I am grateful for this recognition, but most importantly, for the opportunity the organization has provided me to become involved in projects and activities, to take on leadership roles, and to commit myself to helping others in student affairs positions in higher education.”

“Francisco has made significant contributions to the field of student affairs and particularly to programs and initiatives that foster student engagement and student success,” says Miki Cammarata, vice president for student development. “He is well-known in the region and in NASPA as a dedicated, knowledgeable, and highly skilled professional with a student-centric approach and an equity-minded lens.  He is most certainly deserving of this recognition and we are fortunate to have him as a part of our team.”

Díaz has been a member of NASPA since the late 90s. During his involvement with the organization, he has served in a myriad of roles, including National Conference and Multicultural Institute program reviewer, chair of the Region II Latino Knowledge Community, New Jersey representative, membership coordinator, AVP Cohort Connections co-facilitator for Region I and Region II, and as a NASPA Undergraduate Fellows Mentor.

During his nearly 20-year tenure at William Paterson, Díaz has held a number of administrative roles. He joined the University in 2001 as director of campus activities and student leadership. He was named assistant vice president for campus life in 2005, and was promoted to associate vice president for campus life in 2013. Díaz has supervised a wide variety of student-centered departments and initiatives, including Campus Activities, Service and Leadership, Commuter Services, Financial Aid, Greek Life, Hospitality Services, LGBTQA Programs, Orientation, Student Conduct, the Student Government Association, Veteran and Military Affairs, and the Women’s Center.

Over the course of his 33-year career that has spanned both public and private, community and four-year institutions in New Jersey, Florida, and New York, Díaz has directed a wide range of services, including advisement, leadership development, civic engagement, diversity and inclusion, tutoring, theme celebrations, commencement, and various student cohort programs. Through his work in the field and through membership in professional organizations including NASPA, National Orientation Directors Association, National Association of Medical Minority Educators, and the North American Association for Commencement Officers, among others, Díaz has mentored students, new professionals, and mid-career professionals as they enter, adjust and/or expand their careers in higher education. He is a graduate of William Paterson with a bachelor’s degree in communication and a master’s degree in communication arts.