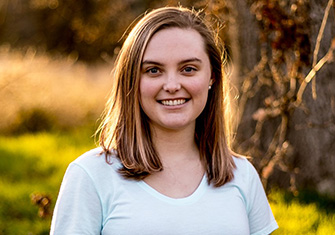 The award, which has been presented annually since 1962, is the highest honor bestowed by the Alumni Association. The recipient is selected by the Association's Executive Council based on strong involvement in extracurricular activities, demonstrated leadership ability, service to the University, and high academic standing.

The award was announced at the Virtual Senior Send-Off Celebration on May 11, where Domenico DiMaio ’97, MBA ’21, president of the Alumni Association, recognized all of the nominees and announced the recipient.

“It was a pleasure to see so many members of the Class of 2021 participate in the Virtual Senior Send-Off Celebration and to recognize the nominees and recipient of the Outstanding Senior Award,” says Jenna Villani, executive director of Alumni Relations.

“I am so humbled and honored to be the recipient of this award,” says Stevenson. “I was very surprised to be chosen because I was among so many qualified students.”

Stevenson rose to a high level of performance as a freshman, and participated in several vocal ensembles in the Department of Music. She was featured on virtual choir videos throughout the past year, and always received high accolades for her performances in virtually every genre, including pop, musical theatre, and classical studies.

She was nominated as president of the Music and Entertainment Organization, a campus club, and remained in that position throughout her collegiate career, serving the community through several successful events both off and on campus.

Stevenson played the leading role in the highly successful production of Pirates of Penzance as a sophomore to rave reviews and was featured twice in the music department’s Collage concert in addition to participating in musicals and “I Want My Eighties” concert.

As a member of Theta Phi Alpha, Beta Xi Chapter, she served as a Standards Board Representative and song chairperson, and several other committees. She was also a member of the National Society of Leadership and Success.

She also participated in many recruitment events for the Department of Music, helping to secure new students in the program and wide participation in departmental events.

“I cannot think of a more disciplined, creative, deserving and passionate student who would represent the Alumni Association Outstanding Senior Award," says Lauren Fowler-Calisto, associate professor in music, dean's fellow/assistant to the dean in the College of the Arts and Communication,  and director of choral activities. “I firmly believe that Gwynne holds the promise of an exceedingly successful career in the music and entertainment industry. She is a woman of true character and will further represent our music department and William Paterson in a way that will benefit the community as well as her future colleagues.”

After graduation, Stevenson plans a career in the live music events industry. “After putting together live concerts on campus, I love seeing everyone enjoying themselves at an event that I was involved in creating — usually after months of hard work and preparation. That’s the real payoff.”

Also nominated for the award were: