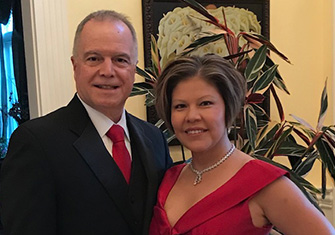 Robert Medina and Patricia Campos-Medina credit the help of teachers who put them on the path to a good education and successful careers. As a way to give back, they have endowed a scholarship at William Paterson University known as The Medina Family Education Endowed and Annual Scholarship. It will support a student with financial need who plans to become a teacher in the science, technology, engineering and mathematics (STEM) field with preference given to a Hispanic/Latinx student.

“We are grateful for Bob and Patricia’s generosity and investment in William Paterson’s students who are pursuing teacher certification in STEM fields,” says Amy Ginsberg, dean of the College of Education. “The Medina family has made an unforgettable impact on helping reduce the financial barriers that many teacher candidates face. The profession is in great need of teacher candidates who make it through, particularly those from diverse backgrounds who will teach in STEM content areas.”

An entrepreneur and respected leader in the Hispanic and business communities, Robert Medina emphasizes the importance of STEM education. “A lot of interest in STEM begins at an early age, whether it’s in middle school or high school, so we need teachers at that level that will motivate the students to get involved,” he says.

“I was influenced to study engineering by my math teacher, Mr. Botwinick at Emerson High School in Union City, who saw that I had a good potential for mathematics. He also helped me get a part time job at his brother’s store so I could save for college,” Robert recalls.

Robert graduated from Newark College of Engineering, now New Jersey Institute of Technology (NJIT), and founded his own engineering firm, Medina Consultants PC, which grew to become the largest Hispanic-owned engineering firm in New Jersey and third largest Hispanic-owned firm in the United States. He later merged his company with an international engineering firm with 40 offices throughout the U.S. In 2013, he was appointed to serve on NJIT’s Board of Overseers, and continues to support the role that education plays in changing lives.

Patricia is an educator, activist and community leader who holds a doctorate in philosophy from Rutgers and teaches labor relations and political science at Cornell in New York City. “I was born in El Salvador and came to the United States as a teenager entering 9th grade,” says Patricia. She lived in Alexandria, VA, where she attended TC Williams High School. Her history teacher encouraged her to apply to Cornell and she remembers that he let her take home his word processor for the weekend so she could type her college application essay.

“I was lucky that I had teachers who invested in me and saw something in me,” says Patricia. “They were a critical influence in recognizing my talents, encouraging me in math and writing – even though English was my second language.”

“Teachers can transform lives in one generation,” adds Patricia. “William Paterson is doing a lot of wonderful things for the immigrant and working-class community and is a great example of what education can do.”

The Medinas chose to endow this scholarship to support upcoming generations of teachers and encourage diversity among educators.