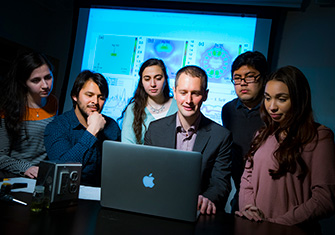 Jonathan "Jay" Foley, an assistant professor of chemistry at William Paterson University, received the prestigious National Science Foundation (NSF) CAREER award for research in using computers to design materials for sustainable energy. The award is NSF’s most prestigious award in support of early-career faculty who have the potential to serve as academic role models in research and education and to lead advances in the mission of their department or organization.

Foley received the award for his research in the emerging field called polaritonic chemistry.

“Only a small percentage of highly meritorious proposals are funded through this NSF CAREER award and I am thrilled that Dr. Foley received it for his transformative advances in this field,” says Venkat Sharma, dean of the College of Science and Health. “Dr. Foley’s research will be integrated with an educational program --The Future Pioneer Project -- that aims to empower undergraduate and graduate students at William Paterson to imagine, create, and implement the innovations that will shape the future of our global society.”

As part of the five-year $542,617.00 grant, a research seminar course, INNOVATION 1000, will be developed for first-year undergraduate students. An annual event called "The Future Pioneer Fest" will also be launched to facilitate exchanges between future scientists, artists, educators, entrepreneurs, creators, and communicators.

“My research group is broadly interested in using computers to design materials for sustainable energy,” says Foley. “Rather than having to make and evaluate many new materials that don't work as desired in the laboratory, we would like to simulate their performance accurately on a computer first so that scientists or engineers only need to make the most promising candidates.”

“Ultimately, we would like to be able to design materials that can facilitate very specific interactions between light and molecules that cause the formation of new hybrid states of matter called polaritons that may provide new opportunities to store solar energy in the molecules themselves.”