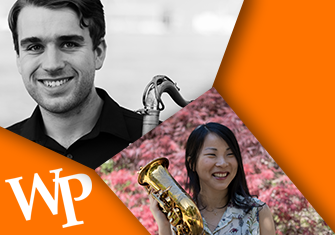 Music alumni Yu Nishiyama, MM ’20, and Hunter McKay, MM ’20, both graduates of William Paterson University’s master of music program in jazz studies/arranging, have been honored for their jazz compositions by the prestigious ASCAP Foundation.

Nishiyama was named as one of 20 recipients of the 2021 Herb Alpert Young Jazz Composer Award, which recognizes gifted young jazz composers up to age 30. McKay was one of six composers to receive an honorable mention in the same competition.

"Yu Nishiyama and Hunter McKay were always stand-out students in our master of music in jazz arranging program,” says Peter McGuinness, professor of music and head of the jazz arranging program. “While at William Paterson, both of these musicians demonstrated incredible creativity and a very prolific bounty of work. Now, they have gone on to make a real mark in the outside world. We could not be prouder!"

Nishiyama was honored for her composition for 17-piece big band, “Honorary Whites,” which explores the emotions she has felt in experiencing discrimination as a minority. “’Honorary Whites’ is a term used to grant some of the rights and privileges of whites to those who had been treated as non-whites,” says Nishiyama, who came to the United States from Japan in 2013. “Racial discrimination is not only between black and white people, and there are so many other forms of discrimination that exist in this world.” Nishiyama employs an alto saxophone solo cutting through bi-tonal harmony to evoke feelings of struggle, fear, rage, jealousy, and sadness. The composition is one of five of her original big band works that will be featured in her upcoming album with the Yu Nishiyama Big Band, A Lotus in the Mud, slated for release in October 2021.

A jazz saxophonist and composer, Nishiyama first began playing piano at age five and picked up the saxophone at age 14. She came to the United States to study jazz saxophone at the University of North Texas, where she wrote arrangements and original compositions for several big bands and smaller ensembles including the One O'Clock Lab Band. She received the Herb Alpert Young Jazz Composer Award in 2019 for her big band composition, “Gloomy Suite.” She was accepted into the prestigious BMI Jazz Composer’s Workshop in 2019, and was selected for the spring 2019 and 2019-20 WIJO (Women in Jazz Organization) mentorship program, which is designed to connect and enrich the community of women and non-binary people in jazz. In addition to her own projects and performances, Nishiyama has given masterclasses at universities in Japan about jazz saxophone and improvisation and has played multiple woodwinds and the keyboard in pit orchestras at different venues.

McKay received an honorable mention for his piece for full big band, “Engine Noise.” McKay says the work “is a direct result of my time living in New Jersey.  While I was getting my master’s at WP, my girlfriend Emily was getting her master’s at McGill University in Montreal so we both travelled back and forth between the two areas a lot,” he explains. “’Engine Noise’ is inspired by the sounds of those train rides and it includes transcriptions of many of the sounds you’ll hear on NJ Transit, Amtrak, and the Montreal Metro, including ticket machines, train horns, track noise, warning bells, and door-closing chimes. I love composing for big band,” he adds, “and I hope to make that a large part of my career going forward so the encouragement of ASCAP means the world to me!”

McKay, a Boston-based saxophonist and composer, works to bridge the gap between various styles such as rock, jazz, contemporary classical, and experimental music, with a clockwork-like approach to rhythm, serpentine harmonies, and a focus on improvisation.  He is a co-founder, with William Paterson alumnus Skyler Hagner, MM ’20, of the New York City-based jazz composers collective, Abacus. They were recently awarded a Jazz Road grant through South Arts to take the ensemble on a two-week tour of New England in July and August 2021. McKay also leads the newly founded virtual iteration of the Social Animals Big Band and is a member of Boston-based experimental quartet AHHA. As a sideman, he has performed with jazz and popular artists, including America's Got Talent winner Landau Eugene Murphy Jr. He is currently a teaching fellow at the New England Conservatory of Music where he is pursuing a doctor of musical arts degree. In addition to his master’s from William Paterson, McKay earned a bachelor’s degree from the University of Southern Maine.

Established in 2002, the awards carry the name of the trumpeter, composer, and bandleader Herb Alpert in recognition of The Herb Alpert Foundation’s multi-year financial commitment to the program. Additional funding for the program is provided by The ASCAP Foundation Bart Howard Fund. The recipients, who receive cash awards, are selected through a juried national competition, which for 2021 was judged by Ambrose Akinmusire, Wycliffe Gordon and Jihye Lee. Through a partnership with the Newport Festival Foundation, one of this year’s recipients will be featured at the Newport Jazz Festival, conditions permitting.