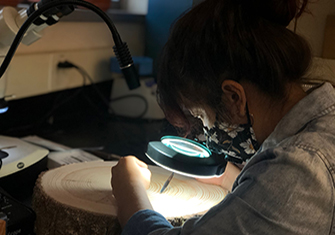 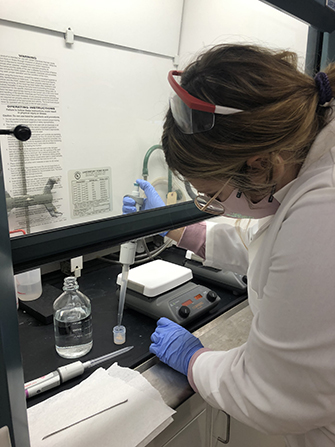 William Paterson University seniors Michelle Correa and Morganne Vogel had a unique academic obstacle to contend with this past semester: The samples from campus chestnut-oak trees they obtained for their environmental science capstone project were too dense, with tree rings too narrow, to allow for timely analysis in their professor’s lab.

The University had a shortened semester in the fall of 2020, on account of health concerns tied to the pandemic, which gave student-scientists about four weeks’ less time than usual to perform and analyze their capstone project work. Additionally, the University imposed limits on how many people were allowed in the same lab at the same time, making lab scheduling tougher.

Correa and Vogel had set out to analyze the chemical composition of tree rings from trees on campus to gauge the impact of emission pollution on them over time, namely before and after the Clean Air Act of 1996. Under pressure, they were able to obtain donated samples of white pine from a facility in Mahwah, New Jersey, and pivoted their project accordingly.

For nine weeks, they spent 10 to 20 hours per week working in the lab, often researching into late-night hours.

“It felt like the ultimate challenge, drawing out everything I’ve learned from past classes,” Correa says. “As an undergrad in the environmental science department, I’ve read through several different scientific journals that spoke about methods and techniques. To actually apply them was a brand-new experience, and quite riveting, I might add.”

Using three different techniques to cross-reference their findings, Correa and Vogel compared the chemical analyses of the tree rings from two different decades: 1972-1982 and 2010-2020.

Their study confirmed a difference in concentrations between macro and micronutrients in the white pine at different points in history.

“They were pioneers here, doing an analysis no one has done at William Paterson before,” says the students’ senior practicum professor, Nicole Davi.

At the end of the semester, Correa, Vogel and classmates presented their capstone research projects to one another, Davi, and a group of fellow WP environmental science professors using American Geophysical Union-style protocol: 12-minute presentations followed by three minutes of question-and-answer.

“It goes without saying that this has been a tough semester and you’ve all impressed me…just seeing your commitment…just seeing how you were interested and worked in the lab—your skills and dedication. You’ve all proved to me that you have grit,” Davi said to the class, half who were in-person and half who took part remotely, as five group presentations kicked off.

Soil bio-nutrients, weather events, and soil acidity caused by pollution may have impacted their results, Correa and Vogel explained during their presentation, but they did not have enough time to investigate all of those variables. “We hope to revisit this topic in the future,” Vogel explained to the audience. “Exploring this research further will answer so many unanswered questions and open new horizons for scientist in this area to explore.”

Their capstone project now behind them, the student-scientists look back at it proudly.

“I am so grateful to be a part of the environmental science program at William Paterson University,” Vogel says. She notes how “wonderful” an experience it was to work in a science laboratory and learn how to use sophisticated equipment such as the Inductively Coupled Plasma - Optical Emission Spectrometer, as an undergraduate.

“This experience helped me gain confidence in the lab and as a student,” Correa adds. Following commencement, she now plans to seek employment in the field of scientific lab research and analysis.