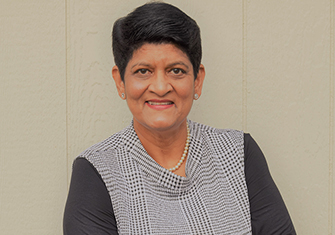 William Paterson University nursing professor and alumna Lydia Albuquerque, DNP ‘18 has been inducted as the eighth president of the National Association of Indian Nurses of America (NAINA), which boasts more than 3,000 nurses across 22 chapters in 15 states.

Albuquerque, who has won numerous awards and grants for her work as both a nurse and academic researcher, says her term as president will be centered on communication, research, education and, perhaps most of all at this point in history: advocacy.

“Advocacy is a pillar of nursing. Nurses instinctively advocate for their patients, in their workplaces, and in their communities, but legislative and political advocacy is no less important to advancing the profession and patient care,” she says.

Research, she adds, is also a pillar in her field, as it helps nurses build knowledge and implement evidenced-based practice. For that reason, as NAINA president, Albuquerque plans to create research interest groups that will work alongside NAINA’s overall research committee. Research topics will be related to the health and wellbeing of Asian American immigrants, their social structure, patterns of immigration, and experienced/anticipated effects of COVID-19 on mental health.

Albuquerque, who also works as an acute care nurse practitioner at Robert Wood Johnson University Hospital, is charged with inpatient care of critically ill patients in that role. “Practice in the clinical field helps me to bring patient care experiences to my students in the classroom, and it also keeps me abreast of changes in technology and practice,” she explains.

Moreover, when it comes to her classroom, the professor hopes her NAINA presidency will help her to “lead by example”—showing WP nursing students the importance of networking and advocating in professional nursing organizations, and particularly those for ethnic minorities.

“Talent wins games, but teamwork and intelligence wins championships,” Albuquerque subsequently told fellow nurses during her presidential inauguration speech in December. “In the end, we will remember not the word of our enemies, but the silence of our friends.”

She is currently readying for both her next semester of teaching at WP, as well as a 90-day presidential virtual tour of listening rounds, alongside her NAINA executive team and committee chairs. On her 100th day in office, Professor Albuquerque says she will work with those entities to finalize a strategic plan for NAINA for the next year.