Body Size of the Extinct Megalodon Shark Indeed Off the Charts in the Shark World, According to New Study out of WP’s Environmental Science Department 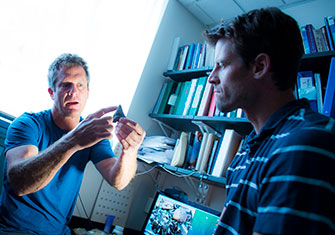 A new study by a team of researchers from DePaul University and William Paterson University shows that the size of the iconic Megalodon, or megatooth shark, was about 50 feet in length—indeed anomalously large compared to body sizes of its relatives. The study appears in the international journal Historical Biology.

William Paterson University Professors of Environmental Science Martin Becker and Michael Griffiths worked alongside Kenshu Shimada, a paleobiologist at DePaul University in Chicago and lead author of the study.

Formally called Otodus megalodon, the size of the fossil shark that lived nearly worldwide roughly 15 to 3.6 million years ago has been poorly understood because these cartilaginous fishes are mostly known only from their teeth. Previous estimates by researchers had the species pegged at about 33 feet long.

The study that the William Paterson professors worked on used measurements taken from specimens of all 13 species of present-day macrophagous (non-planktivorous) lamniforms—the group of shark to which the Megalodon belongs. The professors generated mathematic equations that would allow estimations of body, jaw and dentition lengths of extinct macrophagous lamniforms from their teeth.

This method enabled the researchers to examine the body size distribution of all known macrophagous lamniform genera over geologic time.

The study demonstrates that the Megalodon, reaching at least 46 feet, is truly an outlier because practically all other macrophagous sharks, including extinct forms, have a general size limit of 23 feet; and only a few plankton-eating sharks, such as the whale shark and basking shark, were equivalent or came close to the size.

“This is compelling evidence for the truly exceptional size of megalodon,” Griffiths says.

​Warm-bloodedness has previously been proposed to have led to the gigantism (20 feet or more) in multiple lamniform lineages. The new study proposes yet another factor: cannibalism in the womb.

“Sharks reproduce through a mode called ovoviviparity, where millions of eggs are produced in the ovary and stay in the mother's body until they are ready to hatch. The team discovered that early-hatched embryos eat other unhatched eggs inside their mother in modern lamniform species,” explains a reporter who covered the study in Science Times.

“By the time the pup emerges from the mother, it is already large and ready to defend against predators,” adds a reporter for the Daily Mail who wrote about the professors’ research. “Coming out larger gives them a greater chance of finding food after they are born and couples with favourable water temperatures may have allowed them to hit the gigantic lengths the team claim they could reach.”

“This work represents a critical advancement in our understanding of the evolution of this ocean giant,” Becker says.