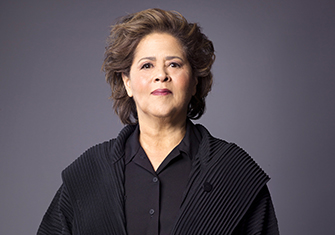 Anna Deavere Smith, the award-winning playwright, actor, and educator, will present a live virtual lecture, “Engaging the World: The Role of the Artist in Society,” on Thursday, October 22, 2020 at 7:30 p.m. as part of the 41st season of the Distinguished Lecturer Series at William Paterson University.

Smith uses her singular brand of theatre blending performance art, social commentary, journalism, and intimate reverie to explore issues of community, character, and diversity in America. Best known for crafting more than 15 one-woman shows drawn from hundreds of interviews, Smith turns these conversations into scripts and transforms herself onstage into an astonishing number of characters. In this virtual conversation, Smith will discuss the many complex identities of America, and interweave her discussion with portrayals of people she has interviewed to illustrate the diversity of emotions and points of view on controversial issues.

William Paterson University’s Distinguished Lecturer Series is in its 41st year of bringing leading personalities from the worlds of politics, government, the arts, literature, sports, science, and business, along with original programs, to the campus in Wayne. In the four-decade history of the series, more than 175 public figures, including British Prime Minister Margaret Thatcher, journalist and activist Gloria Steinem, composer and lyricist Stephen Sondheim, and astrophysicist Neil deGrasse Tyson, have made presentations to 100,000 audience members.

Smith’s career spans five decades. Her most recent play and film, Notes from the Field, look at the vulnerability of youth, inequality, the criminal justice system, and contemporary activism. The New York Times named the stage version of Notes from the Field among the Best Theater of 2016 and Time magazine named it one of the Top 10 Plays of the year. HBO premiered the film version in February 2018.

Looking at current events from multiple points of view, Smith’s theater combines the journalistic technique of interviewing her subjects with the art of interpreting their words through performance. Plays include Fires in the Mirror, Twilight: Los Angeles, House Arrest, and Let Me Down Easy. Twilight: Los Angeles was nominated for two Tony Awards. Fires in the Mirror was runner-up for the Pulitzer Prize.

Smith appears in the upcoming Netflix series Inventing Anna. She recently co-starred on the ABC series, For the People and appeared on the hit ABC series Black-ish. She previously starred as Gloria Akalitus on Showtime’s Nurse Jackie, and the National Security Advisor on NBC’s The West Wing. Her films include The American President, Rachel Getting Married, Philadelphia, Dave, Rent, and The Human Stain.

In 2012, President Obama awarded her the National Endowment for the Humanities Medal. She also received the prestigious 2013 Dorothy and Lillian Gish Prize for achievement in the arts, and in 2015, she was named the Jefferson Lecturer, the nation’s highest honor in the humanities. Smith received the 2017 Ridenhour Courage Prize and the 2017 George Polk Career Award in Journalism.

Smith is the founding director of the Institute on the Arts and Civic Dialogue at New York University, where she is also University Professor at the Tisch School of the Arts.