What Happens When Each Performer in a Musical Records Themselves Singing Alone from Home? WP Vocal Students Find Out 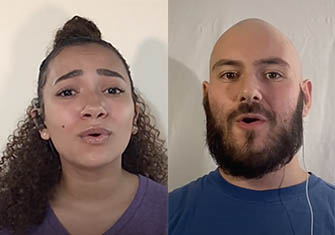 William Paterson University voice students have joined together from their homes to present a virtual performance of the American musical Songs for a New World, to be broadcast online in a serial format throughout the fall 2020 semester beginning Friday, August 28.

The students, who are enrolled in the WP College of the Arts and Communication course titled Performance of Musical Theatre and Operetta, taught by Christopher Herbert, assistant professor in the department of music and vocal area coordinator, auditioned for, rehearsed, and recorded their performances throughout the summer from their homes.

“For performers, the pandemic continues to pose so many challenges, especially regarding the safety of live vocal performances,” says Herbert. “But we have to adjust so that we can express ourselves. I saw this project as a creative way to keep our students engaged and provide them with the opportunity they all wanted to be involved in a campus musical theatre production.”

Songs for a New World, by American composer Jayson David Brown, lies somewhere between a work of musical theatre and a song cycle. The show, originally produced Off Broadway in 1995, is a series of vocally demanding songs connected by a theme: the moment of decision. The lyrics in the opening number, “A New World,” seem to very much describe the current time, as the vocalists sing of the choices one faces when the world suddenly changes, and “all of a sudden, your life is different than you planned.”

For Herbert, the show spoke directly to the situation everyone is experiencing. “We are all living in a new world due to the coronavirus,” he says. “The show has a hopeful message. Applying it to this time is somewhat audacious, but to see these students inhabit and connect to the words has been so rewarding.”

Brenna Moran, a junior from Wayne, New Jersey majoring in vocal performance, contacted Herbert in early June and asked if they could work on an online musical. Herbert suggested Songs for a New World, and Moran says she fell in love with the show.

“Every song is about one moment that changes something in your life,” she says. “Some of the songs are funny, some are sad, some are romantic. There is definitely something you can relate to. And it shows that even if we are all different, we can relate to each other.”

Moran served as co-producer of the project, helping to coordinate the performances and working with the other students as they grappled with the challenges of recording themselves, including lighting and working with a separate audio track while singing. “Everyone worked so hard,” she says of the cast. “They have put so much time, energy and dedication into this show and I’m really happy with how everyone came together.”

Students recorded their songs at home, with instrumental keyboard backing tracks performed by Warren Helms ‘88, an adjunct professor of piano at William Paterson, and alumna Hannah Comia ‘19. Caleb Vazquez of Fair Lawn, a sophomore sound engineering major, is the technical director and video editor, stitching together the various performances for each segment. Shari Selke, production stage manager for University Performing Arts, was the production manager.

Other students performing in the musical are:

Subsequent segments of the show will be released every Friday through November on the WP Voice YouTube channel.