Bridging the Gender Gap: Environmental Science Major Ashanae Gordon ’20 Accepted to “AGU Bridge Program” on Her Road to a PhD in Biology

‘…With my enthusiasm for science and ever-growing experiences, I can hopefully change the game’ 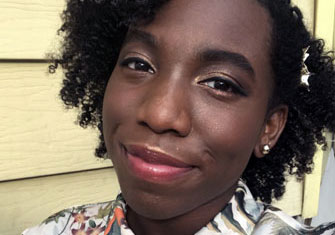 She sees the glass ceiling, and she’s breaking through it.

Ashanae Gordon ’20 is going on to pursue her PhD through the AGU (American Geophysical Union) Bridge Program, which aims to bring more women and underrepresented racial and ethnic groups into advanced geoscience studies.

The Bridge Program supports students through the graduate school application process, pairs them to appropriate institutions and faculty mentors, and provides professional development opportunities, among other services.

Gordon will attend Rutgers University Newark to pursue a PhD in biology with a concentration in ecology. A native of Jamaica whose family relocated to Paterson, New Jersey’s Eastside neighborhood, Gordon says she’s dreamed of earning a doctorate from a young age. “I thought the title of ‘Dr. Gordon’ sounded awesome,” she says. “As I continued my academic career at William Paterson University, I realized that there weren’t many women or women of color being represented in the science field. I believe that with my enthusiasm for science and ever-growing experiences, I can hopefully change the game.”

Gordon spent two years at William Paterson performing research alongside biology professor and entomologist Joseph Spagna. She worked on projects related to both spider and arthropod biodiversity in High Mountain Park Preserve, which is adjacent to the University campus.

Citing the educationally disadvantaged neighborhood she grew up in, Gordon says the support of professors on campus was instrumental in helping her overcome feelings of intimidation early in her WP career. “I felt as though the knowledge that I possessed was not good enough compared to my peers. Fortunately, I met some faculty and staff that taught me that I have to fight hard for the things I want in life and I won’t be alone on my journey,” she explains. “I had a support system that listened and aids me with both academic and personal conflicts that happened in my life, and they told me that even though I will no longer be a student at William Paterson University, they will continue to support me.”

“I am both terrified and excited about this PhD program,” Gordon adds, “but it is a reminder to myself that I did it, and that I am stronger and smarter than I previously gave myself credit for. I know for a fact that this program will not be easy, however, I am ready for any obstacle that I may face.”