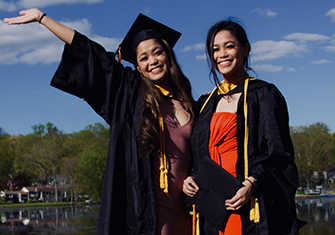 When William Paterson University celebrates its 2020 Commencement on May 26, the pride and joy in the Bowe household will be doubled.

That’s because twin sisters Corrine and Kristen will be awarded their bachelor’s degrees by the University. Both members of the Honors College, Corrine majored in athletic training and would eventually like to become a physician assistant, while exercise science major Kristen plans to pursue a physical therapy career. Having a built-in support system helped make the college experience easier and more enjoyable for each of them.

“College is always stressful and sometimes the stress feels worse alone, so it's great to have my sister there whenever I need in order to relax and remember not to stress out too badly,” Kristen says.

Not only did they have a full academic load, but the pair combined for 32 goals and 20 assists during 120 career matches for the WP women’s soccer team. Kristen was a four-time all-conference selection, and Corrine joined her on the All-New Jersey Athletic Conference Team this fall.

“We played soccer together all our lives and we couldn't change that for our college career,” Corrine explains. “It was great when we she would assist me the ball and I scored a goal, or the other way around. Celebrating our victories together made a win even more special. I'm going to really miss that feeling.”

Commuters who shared a car to get back and forth to campus from Rockaway, New Jersey, their trunk was a mobile closet to help them manage class, practice, team travel, work and social time.

“Every morning we would switch drivers in order to share the load and to give the other a chance to sleep more, depending on what we had scheduled for the day,” says Kristen. “Thankfully, even though we had individual schedules with classes, soccer, and even two different jobs each, we managed to balance our lives and share our car, along with some help borrowing our mom's car once in a while. Even though our lives seemed so hectic, we still managed to make time for each other.”

As each contemplates her future, Corrine and Kristen both say that their experiences at WP have primed them for success in whatever lies ahead.

“William Paterson has helped me prepare for the future by giving me a great athletic training program to be a part of,” Corrine shares. “Not only was I an athlete on the soccer team, but I also I had the opportunity of being assigned with all the other sports at WP for clinical! I got to meet so many more athletes and make new friends. I learned a lot, not only as an athletic training student, but also as a person. William Paterson shaped me into becoming a confident and educated woman, and I am very grateful for it.”

“My professors, coaches, and friends at William Paterson have given me so much inspiration for the future, and I've really found my love of learning here,” adds Kristen. “The relationships I've created were definitely the highlight, and I'm so thankful for the person I am today because of it.”