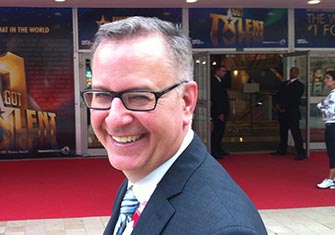 “I’ve always been committed to giving back to William Paterson,” says alumnus Mark Kozaki, who earned his bachelor’s and master’s degrees in communication in 1979 and 1980.

Kozaki went on to become a highly accomplished executive in the media and entertainment industry. Still, he never forgot his William Paterson roots. A faithful donor to the University for more than 20 years, his most recent gift to establish the Professor Mark Kozaki ’79, MA ’80 and Family Communication Department Endowed Scholarship will benefit undergraduate students majoring in communication in perpetuity. He also recently documented a bequest intention that in the future will be added to his endowed scholarship fund, making an even greater impact.

“Mark Kozaki’s decision to establish an endowed scholarship and his recent bequest intention is a fitting tribute to Mark as a proud alum, former adjunct professor, and Distinguished Alumni Award recipient,” says Pam Ferguson, vice president for institutional advancement and president, William Paterson University Foundation Board. “His joyful philanthropy is extraordinary and we are so grateful.”

A first-generation college student, Kozaki attended William Paterson through a combination of student loans, employment income and scholarships. “Call it giving back, paying it forward, returning the favor – it’s all of those things,” he says. “Being the beneficiary of scholarships when I was a student meant so much to me.”

While a student, Kozaki appreciated how many of his professors, including Herb Jackson and Dr. Anthony Maltese, then chair of communication, brought their real-world knowledge and experience to the classroom. “That mix was so enlightening and educational,” he says. “It was a solid foundation that enabled me to get my career started and progress through the next several decades.”

Recently retired, Kozaki was the programming officer for Alhurra TV. In that role, he oversaw all program acquisition and scheduling responsibilities for the pan-Arab news and information network. Earlier in his career, he was a founding member of Discovery Communications. During his 19 years with Discovery, he served in various leadership positions including senior vice president of operations and administration for all of the company’s U.S. networks, general manager for the Travel Channel, and director of operations for Animal Planet. He was also elected to serve two terms on the Board of Governors of the Academy of Television Arts and Sciences, leading the Academy’s nonfiction programming peer group.

In addition to being honored with a Distinguished Alumni Award at the 2005 Legacy Gala, Kozaki has been a frequent attendee at WP in Washington, DC alumni receptions, is a Heritage Society Member, and is a longtime friend of the University. For ten years, Kozaki served as an adjunct professor primarily teaching courses about the business of broadcasting and media, a subject strongly aligned with his background.

Now having endowed his own scholarship for communication majors, Kozaki looks forward to changing the lives of students for many generations to come.