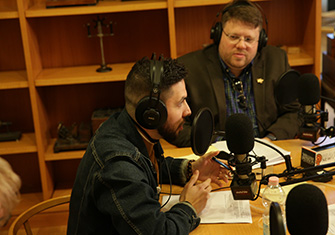 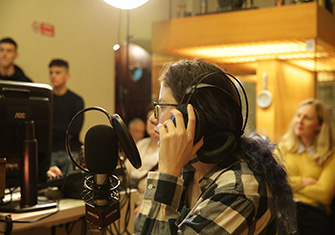 “It is a tremendous honor to have the opportunity to partner with the Marconi Foundation and Outside Radio in Bologna, Italy, to produce this special and historic broadcast, which will celebrate Marconi’s legacy as well as highlight how radio continues to impact lives around the world today,” says Rob Quicke, professor and chair of communication at William Paterson University, who hosted the broadcast.

Quicke was joined in Italy by Sebastian Escobar ’15, station manager of WPSC-FM, who served as co-host. Alyssa Robbins, a William Paterson senior majoring in broadcast journalism and on-air talent for WPSC-FM, conducted interviews on site during the broadcast. Among those was a live interview with Giovanni Emanuele Corazza, president of the Marconi Foundation.

The opportunity to travel to the Marconi Museum came about through Alberto Lenzi, a resident of Bologna and the founder of Outside Radio, a radio station by and for people with autism and other communication disorders that launched on February 13. Lenzi’s son, who has autism, attended a class in radio broadcasting at William Paterson last summer as part of an international travel program that brings students from Italy to participate in the University’s Summer Youth Programs.

“The Brave New Radio team was so kind and helpful with my son, and they taught with love and great patience and understanding,” says Lenzi, who was inspired to create Outside Radio after his son’s positive experience at William Paterson. “We want to work together and are excited that we can all be in Bologna on World Radio Day to broadcast all over the world.”

WPSC-FM has won numerous accolades during the past decade. In 2018, the station won the prestigious 2018 Marconi Award for “Noncommercial Station of the Year” from the National Association of Broadcasters; the Marconi Awards honor radio stations and on-air personalities for excellence in broadcasting. The station also has been named Best Radio Station in the Nation (among institutions with more than 10,000 students) by the Intercollegiate Broadcasting System (IBS) four times since 2012, and was named 2019 New Jersey Student Radio Station of the Year by the New Jersey Broadcasters Association.

“I want to congratulate WPSC Brave New Radio at William Paterson University, for traveling to Italy and the Marconi Museum for this World Radio Day. We are proud of their efforts to celebrate the importance of radio and to represent the great state of New Jersey,” says Paul Rotella, president and CEO of the New Jersey Broadcasters Association.

For additional photos from the trip to Italy, see our album on Facebook.