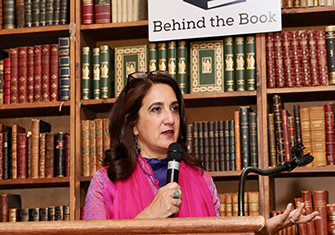 Marina Budhos accepts honors this fall from Behind the Book, a literacy organization that reaches underserved communities and students in New York City

The National Endowment for the Arts (NEA) announced this week that Marina Budhos, award-winning author and professor of English at William Paterson University, is one of 36 writers who will receive its prestigious fellowship in creative writing this year.

The NEA reports receiving nearly 1,700 eligible applications, anonymously reviewed by a panel solely on the artistic excellence of the writing sample submitted. Winners are receiving a $25,000 grant each to fund future writing, research, travel, and general career advancement.

“NEA is a writer's dream; it's a fellowship that is really, really hard to get,” Budhos says. “It feels as if someone is conferring faith in you and faith in a particular project.”

For Budhos, that project is an adult novel-in-progress, Liberty Park.

“The novel thus far emerged from this very pure space when I was in residency at the Virginia Center for the Creative Arts, so the fellowship came at such a crucial moment, encouraging me that yes, I am on to something artistically,” Budhos says.

Liberty Park tells the current-day story of Indo-Guyanese widower Arthur and his adult son Ravi, who struggle to connect and reconnect in the shadows of immigration, fame, death, and divorce.  Set in New Jersey, Budhos’s novel portrays two different Americas for two different immigrant generations trying to establish their identity and manhood – that of a quiet father traumatized by the anti-Indian violence of Jersey City in the 1980s and that of a fiery son who distances himself from his family and immigrant past for a career in Hollywood.

In her previous novel, The Long Ride, Budhos told the story of three mixed-race girls during a 1970s integration struggle. Her novels Ask Me No Questions and its follow-up Watched take on surveillance in a post-9/11 era. Budhos has also co-authored two non-fiction books with husband Marc Aronson, Eyes of the World: Robert Capa & Gerda Taro & The Invention of Modern Photojournalism and Sugar Changed the World: A Story of Magic, Spice, Slavery, Freedom & Science.

“I grew up in Queens, NY, in Parkway Village, a community built for U.N. families, and a haven for international, mixed, and American families during the ferment of civil rights and social change,” Budhos writes on her website. “Over the years, I’ve come to understand that this sense of crossing over, of mixture, permeates my way of seeing the world. And it drives my writing, too. I am an adult author who crossed over into young adult; a fiction writer who frequently crosses over into nonfiction; and a writer who loves to create worlds that capture these cultural complexities.”