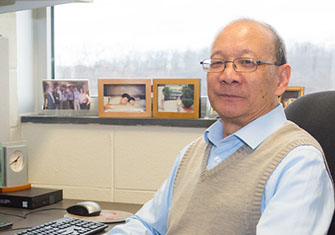 Gabe Tiande Wang, a professor of sociology at William Paterson University in Wayne, New Jersey has been awarded a 2019-20 Fulbright U.S. Distinguished Chair Award in the Social Sciences to teach and lecture in China.

Wang will teach courses in Thesis Writing and Population Studies at Ren Min University of China in Beijing from February to June 2020, as well as give a number of public lectures. While in China, he will also continue his research on population policies and their implementation in China and India and on a cross-cultural comparison between the United States and China which are expected to result in forthcoming books.

A member of the William Paterson University faculty since 1996, Wang served as chair of the Department of Sociology from 2005 to 2011 and as director of the Asian Studies Program from 2001 to 2005. A specialist in cross-cultural comparative studies, population and socioeconomic development, and adolescent deviant behavior in both the United States and China, Wang has given invited lectures on social research, population, and juvenile delinquency at several universities and research institutes in China since 1995. Supported by a Fulbright-Hays Group Travel Abroad grant, Wang visited many places in India with other educators from New Jersey and New York areas during the summer of 2006. In 2014, he received the Fall Fellowship in Korean Studies Award from the Korean Society and visited many places in South Korea with five other scholars and publishers from other states.

Wang is the author of five books and numerous book chapters, journal articles, and presentations. He has served as a member of the Fulbright National Screening Committee and was a member of the board of directors of the Association of Chinese Political Studies.  In 2003, he was recognized as an outstanding Asian-American Business and Community Leader by Bergen Community College’s Asian History and Heritage Committee. A graduate of Yunnan University in Kunming, China, Wang holds master’s and doctoral degrees in sociology from Brigham Young University.