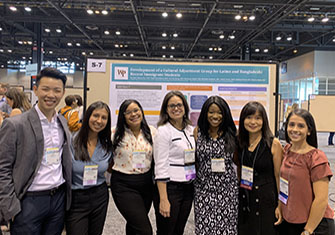 Professors Ma and Torres (second and fourth from right, respectively) and students who volunteer with their service project present joint research inspired by that project during the American Psychological Association’s 2019 conference in Chicago. 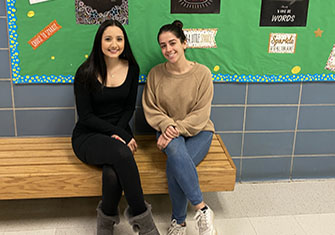 Navigating a new country, a new culture, and a new language while navigating the social, emotional, and physical changes that come with being a middle or high school student is not an easy task.

Since fall 2018, William Paterson University psychology professors Pei-Wen Winnie Ma and Aileen Torres have subsequently been donating their time and talent at three middle schools in Paterson, New Jersey to provide on-site group therapy to sixth, seventh, and eighth graders who recently immigrated to the United States. Starting in spring 2020, at the request of city school administrators, they will expand their services to John F. Kennedy High School.

Each of the three middle schools’ weekly therapy sessions is provided in the native language of that school’s largest population of recently-immigrated youth: Spanish at New Roberto Clemente School, Arabic at School 9, and Bengali at Don Bosco Academy. Group therapy at the high school will start in Spanish, but may expand to include Arabic and Bengali in the future.

Beyond language, constructing the groups in such a way allows culturally-specific issues to arise and be addressed in therapy, the professors say.

LatinX students often have to grapple with piecemeal migration and family separation; Arab students find the most difficulty with how to practice the Muslim religion in a country where most people are not Muslim; and Bengali students, followed by the Arab group, report the most bullying, Ma and Torres explain.

A team of 12 William Paterson psychology students, comprised of undergraduate, graduate, and doctoral candidates, have been volunteering with the professors’ community outreach project – six of them as on-site therapy facilitators, and six more who use research, as well as facilitator and middle schoolers’ feedback, to help develop and refine in-therapy activities.

“The goal is to create a space for these students to talk about their experiences as well as listen to their peers’ experiences and know that they are not alone,” says Angelica Briggs ‘16, a second year master’s student who has been facilitating LatinX group meetings. “We talk about family, friends, teachers, those in the community around us … stress, coping strategies, relaxation techniques, and conflict resolution, among many other topics.”

Across cultural backgrounds, the newly-immigrated students report having a hard time adjusting to city life, with less time playing outdoors and smaller living quarters than they had in their native countries. The upheaval of their family dynamics is also upsetting for the students: They don’t see their parents as often because parents are now working more or later hours, Ma explains.

“I knew of so many bilingual students on campus who were looking for ways to help the immigrant community, but didn’t know how,” Ma says. “This has been a great way for them to give back, and they are using the experience from these sessions to generate research papers and presentations.”

Five student-volunteers presented their work at the American Psychological Association conference in Chicago last year – their first time attending and participating in a large national conference. Five more students will be leading a roundtable discussion session about their research and group intervention experience at the Latino Mental Health Association of New Jersey’s annual conference next month.

“I have learned so much from the experience of running these groups that you cannot teach in a lecture or read in a textbook,” Briggs says. “Personally, as someone who moved to the United States at a young age: I would have loved to be a part of a group like this. My own experience has made me passionate about this field and the populations I want to work with in the future. Being able to provide services to these students as a part of a team has only fueled that passion even more.”