Chinese Song and Dance Troupe to Present “National Beauty,” a Performance of Traditional Chinese Music and Dance, at William Paterson University on December 11 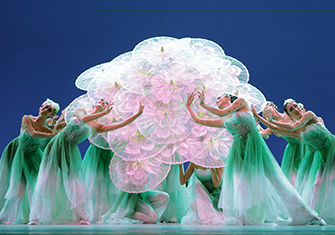 The Chinese Oriental Performing Arts Group, China’s premier music and dance troupe, will present “National Beauty,” a performance of traditional Chinese music and dance, on Wednesday, December 11, 2019 at William Paterson University in Wayne. The program is presented at part of the 10th anniversary celebration of the University’s Center for Chinese Art.

“National Beauty” will feature oriental songs and dances created by famous Chinese artists in the folk-art style unique to China that epitomizes their deep love of culture, music, and dance. In addition to traditional, ethnic and modern Chinese dances, the performances will include music performed on traditional Chinese instruments, as well as by acclaimed Chinese singers Jinying Wei, Niu Niu, Zilun Huai, and Siyu Huo.

Among the dance performances will be “Green: An Intoxicated Moonlit Night,” meant to evoke the joy of dancing under the moon; “Golden: The Wonder of Traditional Chinese Medicine,” which tells a story of bringing forth health and happiness; “Rainbow: Elegance of the Peking Opera,” a celebration of a renowned performance by Mei Lanfang in 1930 in the United States created a sensation; and the traditional Jasmine Flower Dance.

The Chinese Oriental Performing Arts Group is a national level performing art and cultural group directly under the Ministry of Culture and Tourism of China. The group has performed throughout China, where it has participated in many important national events, and has represented China in nearly 100 countries and regions around the world.

William Paterson University’s Center for Chinese Art is the first nonprofit center for Chinese art in the United States that aims to academically promote cultural and artistic exchanges between the two countries. Established on September 9, 2009, the Center has offered courses, symposiums and exhibitions of Chinese art, presented numerous demonstrations and talks by renowned Chinese artists, and provided study abroad programs in China focused on Chinese art and culture. It has gained international recognition in art circles in both the United States and China.