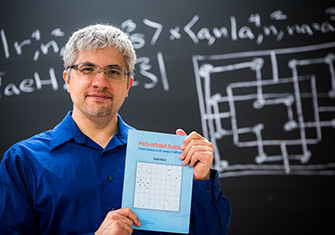 When mathematics professor David Nacin introduces a new concept to his students at William Paterson University, he often does so with a puzzle. He creates the puzzle himself, based on whatever the given mathematical concept is, presents it in class, and then explains that the concept he is about to teach will allow students to solve that puzzle.

“It gets the students excited. It’s about making math fun,” Nacin says, with a contagious enthusiasm, citing a growing trend in his discipline – recreational math. “It’s a way to make math more popular and bring it to as many people as possible.”

Spring-boarding off that concept, Nacin just released his first book of puzzles – nine different types of puzzles he created that are spins on the popular Sudoku game, a game, Nacin says, that “doesn’t normally have enough math in it to be interesting.” Building upon the rules of Sudoku, Nacin introduces new challenges in his 9x9 puzzles by adding clues involving sums, means, and divisibility, among other mathematical operations. Yet another challenge: Unlike Sudoku, Nacin generally does not give away the value of any of his puzzle cells; players must start from scratch.

“You could say I’m bringing some real mathematics into a game that millions of people are already familiar with,” he explains of the puzzles in his book, aptly titled Math-Infused Sudoku: Puzzle Variants at All Levels of Difficulty.

Published by the American Mathematical Society, each of the book’s first eight chapters presents a mathematical rule system, followed by a series of puzzles based on rules in that system, progressing in difficulty from easy to hard. In the final chapter, the eight puzzle variants are combined into a single complex puzzle type that puts all of the reader’s new skills into play.

Nacin made a conscious decision not to discuss any known strategies for the 81 puzzles in his book. “It ruins one of the more satisfying aspects of discovering a new puzzle: uncovering the techniques needed to succeed,” he writes in the preface. The book does include an answer key, though.

Nacin is prolific when it comes to puzzle-making. When asked how many brand new types of puzzles he’s brought to life since he started this craft nine years ago, he must consult the records in his computer. “The total number of puzzle types changes since I’m always creating new ones,” he responds, explaining that he had designed the first-ever puzzle over a permutohedron just that morning.

He concludes that he has created 102 tested Sudoku variants, and far more than that in other varieties of puzzle, including different types of chess puzzles, group theory puzzles, and platonic solid puzzles. “I get bored with straightforward math, and once I get a good strategy for a puzzle I’ve created, it’s time to come up with a new type of puzzle.”

Nacin makes puzzles regularly for four different publications, AMA Focus, Math Horizons, College Math Journal, and Mathematics Magazine, whose editorial staff thought his Tribus puzzles – a three-by-three square of puzzles within a puzzle – were so unique that they asked him to create one Tribus puzzle per issue for all of 2019.

He also maintains a blog dedicated to his puzzles, and enjoys receiving feedback from around the world on his creations.

Most of all, though, Nacin enjoys using his puzzles to teach students. He doesn’t require students to complete the puzzles and doesn’t assign completed puzzles a grade. Nacin prefers to use his creations for educational fun.