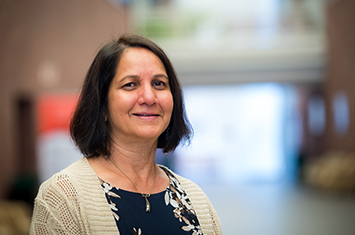 Madhuri Mukherjee just set off on an adventure she has dreamed about for years. On September 9, she journeyed nearly 9,000 miles to Madagascar, an island nation in the Indian Ocean off the coast of East Africa, to serve as a Peace Corps volunteer for the next 27 months.

For Mukherjee, an associate professor of languages and cultures, the opportunity to serve in the Peace Corps is something she has thought about for decades.  A native of India, she studied French at the Universite Lyon II in Lyons, France and the Universite de la Sorbonne Nouvelle in Paris, France, before coming to the United States in the early 1990s to study at Rutgers University, where she earned master’s and doctoral degrees in French.

“Besides one’s qualifications, the Peace Corps has two requirements: You must be 18 or older, and you must be an American citizen,” she says. “When I became a citizen in 2000, I had a young family and was beginning my teaching career, and the time was not right. But now, my children are grown and independent, and my family is very supportive of me pursuing this dream. I am very grateful to the University administration for granting me the leave of absence and giving me the chance to give back on behalf of my adopted country.”

Madagascar is the second largest island nation in the world, and the fourth largest in terms of land mass. Located 250 miles off the coast of Mozambique in East Africa, it is a land of enormous biodiversity; 85 percent of its plants and animals are found nowhere else (including the now-famous lemurs). It is also one of the world’s 10 poorest countries, with a growing population of 26 million.

A requirement of the Peace Corps is that you learn the language of the host country, so for Mukherjee, who teaches French at William Paterson—and already speaks four languages fluently—Madagascar, a former French colony, was attractive. “I would have gone anywhere in the world,” she says. “I did want the challenge of learning a language, and to also be somewhere related to my expertise. Although French will come in handy in Madagascar, I will still have to learn its national language, Malagasy, and possibly one of the 18 or so different dialects.”

Mukherjee, along with approximately 45 other education volunteers, will spend the first three months in training, learning the language and culture while living with a local family. “It’s a total immersion in the culture of the country,” she says.

Once her training is complete, she will be placed somewhere in the country to teach English to middle school and high school students. As part of her Peace Corps service in Madagascar, Mukherjee will be certified as a Teacher of English as a Foreign Language (TEFL) by the Center for Applied Linguistics in Washington, DC, and she hopes to use this new credential in some curricular capacity at William Paterson when she returns to the United States.

The Peace Corps provides an allowance for food and housing that enables volunteers to live at the same level as their host communities. “It is a developing country so there will be some challenges; there might not be access to running water or consistent electricity,” Mukherjee says.

“I will certainly have to ride in packed buses or walk five miles to school or haul water, which will be physically demanding,” she adds. “But I am prepared to embrace every new experience that comes my way. I am excited to explore this country which has so much to discover.” Mukherjee plans to write a blog about her experience, posting as Internet access permits.

As a professor who teaches, among other subjects, the literature of former French colonies, Mukherjee is hoping to collaborate with academics there and perhaps translate works from Malagasy into English or French.

She is excited to raise awareness of the importance of the Peace Corps and other service opportunities in general, and to encourage William Paterson students to consider such opportunities following graduation. “Not all of our students can study abroad during their time on campus,” she says. “The Peace Corps is a wonderful developmental opportunity—a chance to travel to one of 60 countries, do good, and empathize. It’s an amazing opportunity for our students.”

For Mukherjee, this is an exceptional opportunity to serve in a developing country. “When you grow up in a country that is not overflowing with riches, as I did, and see how people live, you become sensitive to issues of inequality. I am privileged to have the life I’ve lived, and to now be of service,” she says.